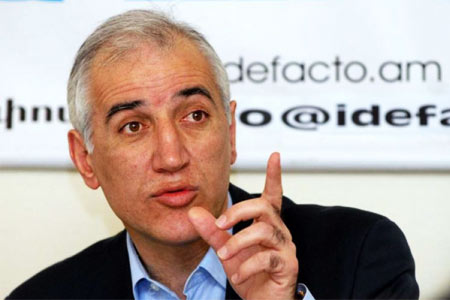 ArmInfo.In the post-election period, economic activity in Armenia will intensify even more, which is conditioned by the resolution of the internal political crisis  through the formation of the authorities, which will now have to  implement the announced programs. Economist Vahagn Khachatryan  expressed this opinion to ArmInfo.

"The current economic realities in our country are characterized by  exceeding the planned level in the first five months of 2021 by only  0.4%, inflation up to 5.9%, as well as a revision of the Central  Bank's forecast of economic growth indicators for 2021 from 3.2 to  4.5%. Despite the rather pessimistic post-war forecasts for the  economy, in general, the negative scenario was avoided largely due to  the implementation of the current government's economic policy in the  past 3 years, "he stressed.

According to the economist, to a certain extent, the development of  the economy is facilitated by the liberation of business from  extortions and corruption within the framework of the previous  system, as well as the provision of certain preferences and freedoms  by the government to entrepreneurs. He believes that another step by  the government towards stimulating economic growth is the  developments. The latter, according to his forecasts, may have a  positive effect on increasing the investment attractiveness of  Armenia for foreign investors.

Commenting on the observed rather sharp revaluation of the Armenian  currency, the dram, Khachatryan noted that this process, in general,  was predictable. Especially taking into account, due to the growth of  tourist flows to Armenia, the annual increase in the dram exchange  rate in the summer months. Another major factor in favor of the  revaluation of the national currency, he considers economic activity  - a 20% growth in export rates.

As a result of a sharp revaluation of the dram over the past two  weeks, the buy-sell rate of the US dollar fluctuates within the range  of 490-500 drams, the euro - 585-595 drams, the Russian ruble -  6.7-6.9 drams.  Meanwhile, since last autumn, the exchange rate of  the same American dollar at times reached 540 drams.

"And of course, without a doubt, the reduction in the circulation of  the money supply in order to regulate inflation risks by the  regulator played its role. I would like to pay special attention to  the elections, or rather, considerable funds spent in the elections  by some political forces. These funds, moreover, a certain part of  them came from outside, were spent on the domestic market, which also  led to the strengthening of the dram. In general, I believe that in  the absence of force majeure, these quite natural trends in the  economy will continue, "the economist summed up.