Nikolay Podguzov: The share of drams in the implementation of  projects on the territory of Armenia will grow "dramatically" 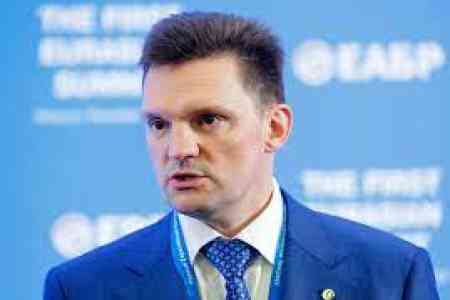 ArmInfo. The share of drams in the implementation of projects in Armenia will grow dramatically. Chairman of the Management Board of the Eurasian Development Bank  (EDB) Nikolay Podguzov said at the ceremony of signing an agreement  on the provision of a credit line for $ 20 million to one of the  largest banks in Armenia, Ardshinbank,  answering ArmInfo's question  about <the state of the Armenian dram in the Bank's loan portfolio>.

To note, according to the new EDB Strategy for 2022 - 2026, the Bank  intends to significantly increase lending to partner countries in  national currencies. According to Podguzov, in recent years, the  demand for credit resources denominated in national currencies has  grown significantly. According to him, due to the size of economies,  today rubles and tenge prevail in the assets of the Bank, but the  need for financing in drams and other currencies of "small economies"  is also present. He noted that for this purpose, for example, the  Bank plans to issue a bond issue by the EDB in Armenian drams, in  order to be able to direct liquidity to the financing of Armenian  programs in the national currency.

At the same time, answering ArmInfo's question about the  possibilities not to be limited to financing infrastructure projects  in "small economies" on the basis of public-private partnerships, but  to pay more attention to project financing of specific enterprises,  clusters within the framework of the integration strategy of the EAEU  member states and in order to support the process reindustrialization  of Armenia, Podgulov noted that this task will be solved in the  course of joint work with the government of the country after  clarifying the policy of economic development. " Cooperation with the  Government of Armenia is very important for us in this case, from the  point of view of what is the vision of the Government of the country  on the development of the economy, how we will jointly solve the  problems of development. This kind of communication is being carried  out, and I am sure that we will solve these problems as well.

"Really large projects should be aimed at integration in the Eurasian  economic space. Therefore, it is extremely interesting for us to  implement so-called cross-border projects in this regard, which  affect several states. This is the specificity of our work as a  development bank, which presupposes a greater focus on  infrastructure, on creating global conditions for the functioning of  the economy, " Podguzov emphasized. As examples, he emphasized the  global project actively promoted by the Bank, which will be of  interest to Armenia as well, to create a single commodity-conducting  network of the EAEU. "That is, a logistics system will be created for  all five states of the Union, which will allow for food deliveries,  to solve the problem of food security of the entire economic space,"  Podguzov said.

As for the restoration of the industrial potential of Armenia, the  process of reindustrialization of the country, then of course, the  Bank is constantly in a state of communication with specific  companies. For example, the EDB is participating in a project to  modernize the Zangezur Copper and Molybdenum Combine (ZCMC). He  stressed that Bank is actively investing in financial infrastructure  and, with the support of the Central Bank of Armenia, is actively  working with the  Armenia Securities Exchange (AMX), and there are  certain achievements here. "This year we have financed the renewal of  the rolling stock of the SCR and this is a fairly large investment.  Thus, we have projects and they will appear in even greater numbers  after we clarify the economic development policy together with the  Armenian Government," the head of the EDB summed up.