AEON Corporation interested in construction of a copper smelter in Armenia 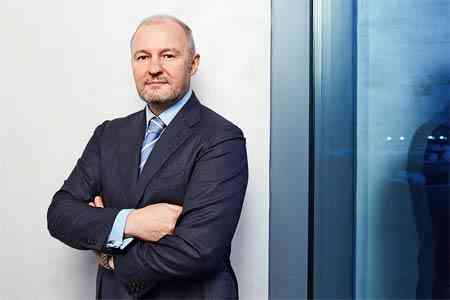 ArmInfo.AEON Corporation is showing interest in the construction of a copper smelter (smelter) in Armenia. This was stated by the head of the corporation, Russian businessman Roman Trotsenko in Yerevan at the presentation of the Geopromining company, controlled by the AEON Corporation, which owns two large assets in Armenia: the Agarak Copper-Molybdenum Combine, and the GPM GOLD company, which operates the Sotk gold deposit and the Ararat Gold Recovery Plant.

Roman Trotsenko took part in the work of the Russian-Armenian business forum, held on September 20 in the Armenian capital within the framework of the Russian delegation led by Deputy Prime Minister Alexei Overchuk.

According to Trotsenko, Armenia has very serious prerequisites for building up success in the mining industry. First of all, this is the engineering school, trained personnel, and the availability of reserves. Modern technologies allow us to work in difficult conditions with low metal content and refractory ores, which the history of our company proves. He noted that one of the essential problems of the mining industry in Armenia is that it has not been complex since Soviet times. That is, concentrate was produced, which was sent all the way to Siberia to concentrating plants; a smelter was never built in the country to obtain metallized copper. He stressed that Geopromining, as a company, aims to offer and implement such a large project in Armenia, which would allow to lengthen the value added chain, solve the logistical problem, since the export of metal is always easier than export of concentrate, and to obtain new preconditions for the development of such industries in Armenia such as electrical engineering, electronics, production of electric motors and other promising products that consume copper, molybdenum and copper alloys. This would be a very practical task for our countries, which would significantly increase the volume of mutual trade and the GDP of Armenia.

At the same time, in an interview with ArmInfo, Trotsenko stressed that the company has not yet begun to study the feasibility of this project, since this requires a political decision on what the project will be; to determine the place, the nature of this project, since it is associated with such things as energy, the generation of which is still not enough, the water circulation cycle, related to questions about where to get water and how to use it, and other issues. This, as the businessman noted, is a rather complex project, so we need to go through it in stages. As a rule, it takes 2-2.5 years from the start of a project to the first construction, so today we are present at the very beginning of its discussion.

“I agree that this is a good project and now it is necessary to implement it, finding resources, space, energy for it,” Trotsenko stressed.

Speaking about the implementation of a large investment program for the modernization of the Agarak Copper-Molybdenum Combine (ACMC), the businessman noted that the company has completed the stage of modernization, which was associated with the water circulation cycle, thanks to which ACMC has become one of the most modern enterprises in Armenia that meets all environmental requirements. If we talk about expanding the volume of production at the enterprise, then such a decision has not yet been made, because for the company it will be tied to solving the issue of building a smelter. “If we see that the decision has been made and the smelter begins to build, then it makes sense to increase the resource base, because the ore is poor, and the transport and logistics scheme is rather complicated,” Trotsenko stressed.

At the same time, answering the question about the work of the largest in Armenia Sotk gold mine, the work of which has become somewhat problematic after the end of the 44-day second Karabakh war, the Head of AEON Corporation noted that the Sotk deposit is working according to its production plan. This, he said, is a well-functioning enterprise. The most significant change took place in the design of the quarry, it was necessary to change the internal infrastructure - power lines, intra-quarry roads.

To remind, the Geopromining group of companies (GeoProMining) entered Armenia in 2007, with the acquisition of GPM Gold, which operates the Sotk gold deposit and the Ararat gold recovery plant. Then the company acquired the Agarak Copper-Molybdenum Combine. The company has invested about 400 million US dollars in the Armenian economy and has become the largest private industrial investor in Armenia.

The investments were aimed at technical re-equipment and technological modernization of two enterprises. Thus, the company "GPM Gold" became the first in the world, where the innovative "Albion" technology for the processing of refractory ore was successfully introduced. Agarak CMC has successfully completed two stages of production modernization. GeoProMining is one of the five largest taxpayers in Armenia. The company has also committed more than  10 million US dollars to various social projects as part of its Corporate Social Responsibility Program. Note that the founder of Geopromining Siman Povarenkin sold the company to businessman Roman Trotsenko, who obtained the capital of the company in 2020.