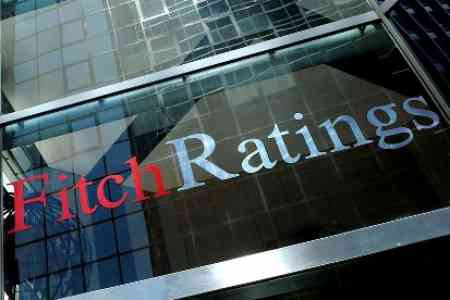 ArmInfo. Fitch Ratings has affirmed Armenia's Long-Term Foreign-Currency Issuer Default Rating (IDR) at 'B+' with a Stable Outlook. This is stated in the Fitch  report, which provides revised forecast for Armenia's GDP growth for  2021 towards growth.

''Armenia's 'B+' IDRs reflect strong per-capita income, governance  and business environment indicators relative to peers, as well as a  robust macroeconomic and fiscal policy framework and credible  commitment to reform that are underpinned by an IMF programme. Set  against these strengths are high public foreign-currency debt,  relatively weak external finances, and geopolitical tensions that  have the potential to reignite into military conflict.

Prime Minister Nikol Pashinyan's decisive win at the 20 June 2021  snap elections secured a parliamentary majority for his 'Civil  Contract' party and should resolve the domestic political crisis that  has ensued since the 6 November 2020 Russian-brokered ceasefire  agreement with Azerbaijan concluded the 44-day Nagorno-Karabakh war.  The election outcome refreshes the government's mandate to pursue key  structural reforms and tackle corruption, and is a further  endorsement of democratic-based politics as the second elections to  be widely acknowledged as free and fair following the 2018 Velvet  Revolution.  The new government has emphasised regional peace and  commitment to the OSCE Minsk group process to resolve the  Nagorno-Karabakh dispute, a marked softening in its tone from last  year. Nevertheless, periodic border incidents and minor infractions  of the ceasefire agreement are reminders of the possibility for  renewed fighting to erupt and the greater reliance on Russia for  security in the region'', the FITCH report reads.

GDP growth forecast for 2021 improved ''Real GDP staged a strong,  broad-based rebound in 2Q21 of 13.2% yoy, driven by base effects,  dynamism in construction, agriculture and services, and supported by  strong remittance inflows and continued accommodative policies. Fitch  forecasts real GDP growth to recover to 5.5% in 2021 (2020: -7.4%),  moderating to 5.3% in 2022 and 4.7% in 2023.  ''Risks to our  forecasts are fairly balanced, with the potential for faster economic  recovery offsetting risks of renewed economic restrictions from a  potential further intensification of the Covid-19 crisis in the  context of Armenia's slow vaccination roll-out (under 5% of the  population was fully vaccinated by mid-September).

Inflation to average 7.4% in 2021 Inflation accelerated to 8.8% yoy  in August 2021, above the Central Bank of Armenia's (CBA) target of  4.0%, driven primarily by global pressures on food prices (15.1%  yoy), rebounding demand from the 2020 recession, and bottlenecks in  supply chains. Fitch forecasts inflation to average 7.4% in 2021,  moderating to average 5.0% and 4.0% in 2022-23 as supply chains and  production adjust. The CBA has raised its policy rate by a cumulative  300bp to 7.25% between December 2020 and September 2021 in response  to domestic inflation pressures. An increase in banks' dram reserve  requirements, aimed at enhancing monetary transmission, has also had  the effect of tightening monetary conditions. An unexpected monetary  tightening by major central banks to curb rising global inflation  could lead to pressure on the CBA to further tighten rates.  External  debt to reach 55% of GDP at end-2021 A long record of large current  account deficits not financed by foreign direct investment flows has  resulted in high net external debt (NXD), which we forecast at 55% of  GDP at end-2021 ('B' median: 20%).

Public debt is high, with general government debt/GDP jumping 13pp to  peak at 67.4% (current 'B' median: 68%) at end-2020, due to the  fiscal impact of the pandemic and the Nagorno-Karabakh war's impact  on public finances, the fall in GDP and depreciation of the dram.  Fitch forecasts debt/GDP to fall to 60.2% in 2021 on strong nominal  GDP growth (13%), narrowing of the fiscal deficit, and strengthening  of the dram. Public debt/GDP should continue its gradual downward  trajectory to 55% by 2023, guided by the government's commitment to  its debt reduction fiscal rule, which will be reinstated from 2022.  Foreign currency debt is high at 81% of total government debt in 2021  ('B' median: 63%), and heightens sensitivity to exchange rate  fluctuations.

The narrowing of the goods and services trade deficit in 1Q21, growth  in remittance inflows and tightening monetary conditions have led to  the dram/US dollar appreciating by 6% in 8M21. Fitch forecasts the  recovery of imports as economic activity rises to contribute to a  normalising of the current account deficit to relatively high levels  of 4.4% of GDP in 2021 and 5.0% in 2022 (2020: 3.8%). Government  Eurobond proceeds, emigrant deposits, and modest FDI inflows are  expected to finance the deficit, and the residual and a USD175  million-equivalent special drawing rights allocation to raise  official reserves to USD3.1 billion by end-2021 (end-2020: USD 2.6  billion).

Government deficit to narrow to 3.8% of GDP in 2021 Fitch forecasts  the consolidated government deficit to narrow to 3.8% of GDP in 2021  (2020: 5.1%), and further to 2.0% by 2023. Fiscal performance for  7M21 showed an outperformance relative to both the government's and  Fitch's forecasts at the last review. Tax revenues rose by 10.5% yoy  driven by higher VAT receipts from a rebound in domestic consumption  and foreign trade, while investments and other expenditures were  under-executed relative to the budget at end-July. The deficit will  be financed predominantly by the USD750 million Eurobond proceeds  raised in February 2021, but deficit financing in 2022-23 will focus  more on domestic sources as the government seeks to reduce external  debt and limit vulnerability to dram depreciation.

Factors that could, individually or collectively, lead to negative  rating action/downgrade:  - External Finances: A worsening of  external imbalances, potentially evidenced by higher NXD or wider  current account deficits, or emergence of external-financing  pressures leading to a fall in reserves and a rise in the interest  burden.  - Structural / Macro: Renewed escalation of the military  conflict with Azerbaijan over Nagorno-Karabakh or a  re-intensification of domestic political instability that leads to a  weakening of macroeconomic and fiscal policy direction or  credibility.  - Public Finances: A sustained upward trajectory in  general government debt/GDP over the medium term, for example due to  a structural fiscal loosening and/or further weakening in GDP growth  prospects.

Factors that could, individually or collectively, lead to positive  rating action/upgrade:  - Public Finances: Improved confidence in  general government debt/GDP returning to a firm downward path over  the medium term, for example due to a credibly defined fiscal  consolidation plan.  - External Finances: A sustained improvement in  external indicators, for example lower NXD, improved current account  deficit or FDI inflows closer to the 'BB' median.  - Structural:  Further improvement of structural indicators such as governance  standards, leading to convergence towards the 'BB' peer median, and  improvement in political stability.

To note, at the beginning of September this year Moody's confirmed  Armenia's sovereign rating at 'Ba3', leaving the forecast stable,  expecting real GDP growth in 2021 by 4.5%. Moody's predicts that  Armenia will maintain its current account deficit at 4-5% of GDP  until 2022.  Moody's expects economic recovery and adherence to the  authorities' spending plan to support the reduction of public debt by  2022 to below 60% of GDP.