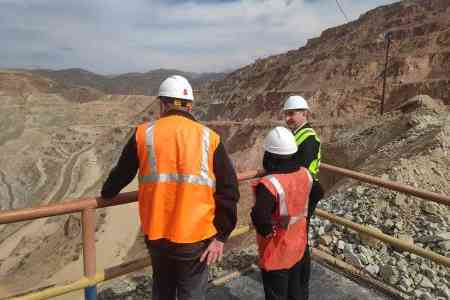 ArmInfo. Minister of Territorial Administration and Infrastructure of the Republic of Armenia Gnel Sanosyan, within the framework of his visit to Syunik region, visited the Agarak Copper- Molybdenum Combine (ACMC). According to the press service of  the department, the Minister got acquainted with the implementation  of the investment program, discussed with the company's management  the new body of the enterprise and production volumes.

The capacity of the tailings storage facility has also increased due  to the relocation of the Iran-Armenia gas pipeline section,  reconstruction of trunk pipelines, and reconstruction of pumping  stations of the 2nd and 3rd heights. Completed the construction of a  new pumping station on the 3rd hill.

As part of the technical project, a recycling water supply system was  put into operation, which significantly minimizes the impact on the  environment. The new system also reduced water consumption by 30%.

The volume of investments in the complex modernization program of  "Agarak Copper-Molybdenum Combine" CJSC amounted to more than USD 30  million.