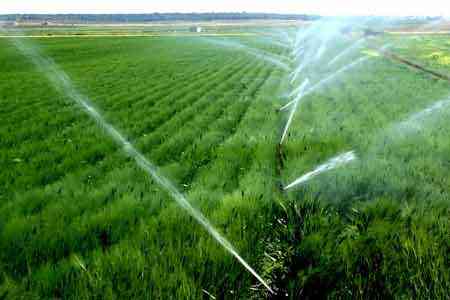 ArmInfo.Water users will be reimbursed for rent for irrigation water for a period of 5 years if drip irrigation systems are introduced on an area of up to 3  hectares. The corresponding decision was made at a government meeting  on October 14.

As the Minister of Territorial Administration and Infrastructures  Gnel Sanosyan stated, this area should be included in the list of  territories served by the Union of Water Users and have a  corresponding agreement.

Armenian Prime Minister Nikol Pashinyan noted that the current  irrigation system in Armenia is a system of losses of water resources  and has no future. According to him, in the context of global  warming, water resources will rise in price and become more in  demand. "Droughts in the near future, in all likelihood, will become  more visible to us," he said, urging to abandon traditional methods  of irrigation.

To recall, on August 24, at a parliamentary meeting, during the  presentation of the government's program for 2021-2026, Nikol  Pashinyan said that the irrigation culture of agricultural land is at  the level of the 19th century, and it is not able to ensure the  development of the sector and a high level of labor productivity.

Pashinyan noted that those farms that completely switch to drip  irrigation will receive 100% compensation from the government for  irrigation fees over the next 5 years. The head of government  believes that there are very deep problems not only in the field of  irrigation, but also in the entire management of water resources.  According to him, in the coming years, it is necessary to more  carefully treat the country's water resources. This, as the prime  minister explained, does not mean that water consumption for personal  needs is below the required level. It is about avoiding losses, he  said. Thus, Pashinyan assures that, on average, the scale of losses  of water resources allocated for irrigation purposes is 60%. That is,  out of 100 liters of water injected into the system, 60% are "lost",  and no one can understand where this water has flowed, he noted. The  head of government pointed out yet another "headache" for the system,  the so-called excess agricultural land. They require, as a rule,  twice, and in some places even three times more water, compared to  other areas.