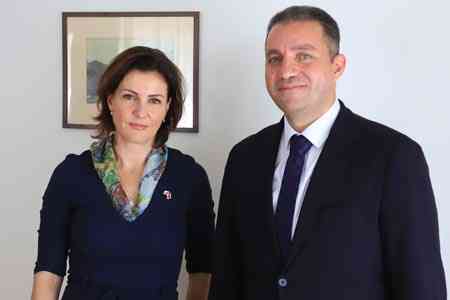 ArmInfo. Minister of Economy of Armenia Vahan  Kerobyan received Deputy Minister of Industry and Trade of the Czech  Republic Martina Tauberova, who is the co-chair of the Armenian-Czech  intergovernmental commission on economic cooperation.

Thanking the Minister for the warm welcome and the agreements  reached, Martina Tauberova noted that the Czech side is ready to  identify and discuss partnership priorities, the implementation of  which can further expand the existing cooperation.

She asked the Minister to present the priorities and problems of  economic development in Armenia and offer their assistance in solving  these problems.

Vahan Kerobyan presented the economic development program of the  country, the main directions of reforms.

During the meeting, issues in the sectors of industry, agriculture,  energy, high technologies, small and medium-sized businesses,  transport, science, digitalization, healthcare, and the environment  were discussed. The Minister proposed to consider the possibility of  working in the fields of pharmaceuticals, jewelry, chemical  industries, infrastructure development. The Czech side, in turn,  noted the successful achievements of their country in the field of  transport, subway construction, creation of renewable energy sources,  technology development and expressed its willingness to share  experience.

The parties expressed their readiness to continue active cooperation  in deepening and expanding trade and economic ties, in areas of  mutual interest, and to outline further steps for effective work.

To note, according to the RA Statistical Committee, the foreign trade  turnover between Armenia and the Czech Republic in January-August  2021 amounted to $ 15.3 million, which is 5% less than a year ago. At  the same time, exports increased by 40% to $ 2.1 million, while  imports fell by 9% to $ 13.2 million