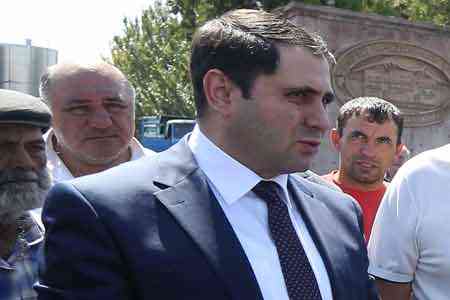 During the meeting with Novak,  the sides discussed issues related to the implementation of gas and  energy programs, as well as the prospects for deepening regional  cooperation in this area. In particular, the parties touched upon the  possibilities of implementing the North-South Electricity Corridor  initiative (Armenia- Iran-Georgia-Russia).

During the meeting, Suren Papikyan and General Director of RosAtom  State Corporation Alexey Likhachev touched upon the programs for  extending the operating life of the existing power unit of the ANPP  and issues of deepening cooperation in the field of nuclear energy.  Issues related to the construction of a new nuclear power unit in  Armenia were also discussed.

It should be reminded that in December 2015, Armenia, Georgia, Iran  and Russia signed a quadripartite memorandum providing for an  increase in the level of management of mutual flows of electricity,  safety and reliability of energy systems. Within the framework of the  memorandum, a number of events are planned aimed at creating the  North-South electric power corridor, which will make it possible to  work with the energy systems of the EAEU and the EU.

Earlier it was reported that the Armenian and Russian sides would  soon start discussing the issue of extending the resource of the  Armenian nuclear power plant until 2031. The concept for extending  the life of the ANPP is already ready and suggests increasing the  resource of the nuclear power plant after its modernization by 10  years. At the same time, the regulator will provide the ANPP with an  appropriate license on the condition that in 2026 the necessary  additional work will be carried out at the plant to further extend  the life of the plant. The list of these works has already been  prepared. At the same time, on April 7 this year, in Moscow, Armenian  Prime Minister Nikol Pashinyan proposed to Russian President Vladimir  Putin to consider the possibility of building a new nuclear power  plant in Armenia.