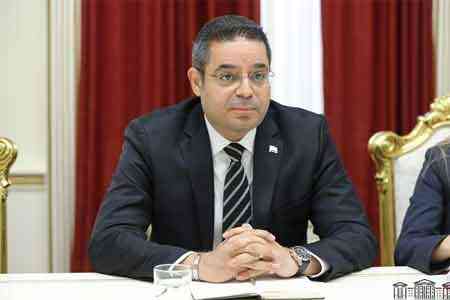 ArmInfo.Ambassador Extraordinary and Plenipotentiary of the Syrian Arab Republic to the Republic of Armenia Mohammad Ahmad Haj Ibrahim proposed to Minister  of Economy of Armenia Vahan Kerobyan to organize an exhibition with  the participation of Syrian business circle. The proposal was  announced during today's meeting.

Also, according to the Ambassador, Syrian entrepreneurs are  interested in opening a textile factory in Armenia. In this regard,  the Ambassador stressed that the textile industry is sufficiently  developed in Syria, to which Minister Kerobyan expressed his  readiness to assist in the implementation of the announced idea of  opening a Syrian production in Armenia. In particular, he informed  the Ambassador that Armenia has a great experience in the textile  industry in terms of labor, which can be used to organize the work of  the factory.

As reported by the press service of the Ministry of Economy, during  the meeting Vahan Kerobyan noting the high level of political  relations between the countries, stressed that it is necessary to  jointly raise the economic cooperation, which has high potential, to  a similar level.

At the same time, the Syrian diplomat attached importance to  Armenia's membership in the EAEU in the context of his country's  entry into the markets of other member states of the Union.

The interlocutors also touched upon the prospects for cooperation in  the tourism sector. In particular, Ambassador Mohammad Ahmad Haj  Ibrahim said that the possibility of introducing a system for  accepting payments in Armenian drams is being discussed in Syria.

To note, according to Armenia's customs data, in the first half of  2021 Armenia exported $ 5.7 million worth of goods to the Syrian  market, which is 64.2% less than a year ago. The lion's share of  exports fell on cigarettes, cigars and cigarillos. At the same time,  the import of Syrian goods to Armenia on a y-o-y terms increased  3.2-fold, providing a volume of only $ 523.4 thousand.

According to statistics, during the reporting period, 240 Syrian  tourists visited Armenia, which is 19.4% higher than a year ago.

It should be noted that the textile industry is also growing at an  advanced pace in Armenia. In particular, in January-August 2021, the  revenue of the textile industry increased 2.5-fold  (against 42.5%  decline a year earlier), compared to the same period in 2020,  amounting to 1.2 billion drams. According to the data of the  Statistical Committee of the Republic of Armenia, such dynamics was  provoked by a tangible increase in the production of fabrics.