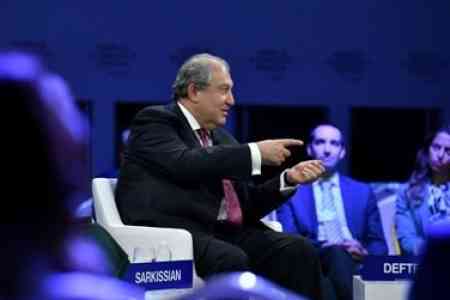 ArmInfo.President of Armenia Armen Sarkissian, who is on a working visit to Saudi Arabia, attended the 5th Conference of the "Future Investment Initiative."

Thus, as the press service of the President reports, "Heads of many  states, members of governments, heads of well-known transnational and  global companies, also businessmen attended the Conference.

President Sarkissian together with the Crown Prince, Deputy Prime  Minister, and Minister of Defense of Saudi Arabia Mohammed bin Salman  attended the opening ceremony of the conference.

The President of Armenia, and the Crown Prince of Saudi Arabia talked  about the need to develop relations between the two countries and  their future. It was noted that the rich historical ties between the  two peoples are a good basis for building future interstate  relations. "

To note, there are no official diplomatic relations between Armenia  and Saudi Arabia, as Saudi Arabia refuses to pursue diplomatic  relations with Armenia. This is due to the Nagorno-Karabakh conflict.  In this matter, Saudi Arabia supports the side of Azerbaijan.

However, relations between the two countries have witnessed  significant warming since the 2010s, possibly due to general  opposition to the rise of Turkish influence. The thaw in relations  began after the rise to power of the Crown Prince of Saudi Arabia,  Mohammad bin Salman, and the growth of hostility between Saudi Arabia  and Turkey, which has bad relations with Armenia.