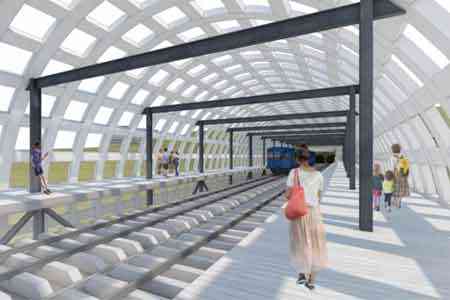 ArmInfo.The leading Russian Metrogiprotrans company has won a tender announced by the Yerevan Municipality for the development of the Ajapnyak subway station in  the same name administrative district of the Armenian capital. Mayor  of Yerevan Hayk Marutyan and President of the Board of Directors of  Metrogiprotrans Valeriy Abramson discussed issues of perspective  development of the subway and design work.

As reported by the press service of the capital's administration,  during the meeting, the Mayor of Yerevan stated that the public  transport reforms are important for the city and they consist of  several parts. "We are now very actively engaged in land transport,  that is, replenishing the bus fleet. At the same time, we are also  engaged in underground transport, that is, the subway, "he said.

Valery Abramson, President of the Board of Directors of  Metrogiprotrans, Ph.D. in Economics, Honorary Builder of Russia,  handed over to the Mayor the sketches of the project of the Ajapnyak  station.  According to him, Metrogiprotrans has also proposed to the  Armenian government a project for the development of a subway worth $  500 million. "The  Russian Agency for Export Credit and Investment  Insurance (EXIAR) is ready to support the program on favorable terms.  With these funds, we will be able to modernize the infrastructure of  the old subway, as well as plan those sections of the city towards  which the stations can be expanded," Abramson said.

As Marutyan pointed out, the preliminary version of the project  envisages the construction of a bridge across the Hrazdan (river, ed.  note) only for the subway, while Metrogiprotrans also proposes to  build a second level for cars or pedestrians. As the interlocutors  pointed out, the construction of an underground subway station is  preferable, since it is much more convenient for people using the  subway and allows the development of various infrastructures.

According to the mayor of the capital, in order to start work, the  project has to be financed within six months. And since the subway is  state-owned and not communal, funding should come from the state, not  from the community budget, Marutyan emphasized. "We all know that  today there are quite serious problems in the country. I hope that  these problems can be overcome in order to find funds for the  subway," the mayor of Yerevan said.

Earlier it was reported that if the loan agreement with EXIAR is  approved, construction work will last about 1.5 years. According to  the city authorities' plan, the path to the new subway station with a  length of 525 meters should pass through a tunnel, the construction  of which began in Soviet times and remained unfinished. Then the  Ajapnyak station remained unfinished, in the project  its  continuation from the Davitashen district on the north-western  outskirts of the city. Earlier, Yerevan Mayor Hayk Marutyan stated  that a new subway station in the capital's Ajapnyak district will be  built with state funds and it will cost the treasury $ 35 million.