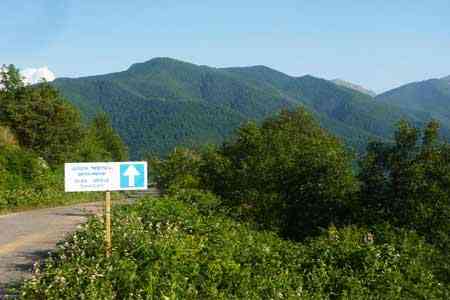 ArmInfo. The Armenian government is considering the possibility of building three more bypass roads in the Syunik region of the republic. Minister of  Territorial Administration and Infrastructures Gnel Sanosyan  announced this at a government session on November 25.

Prime Minister Nikol Pashinyan recalled that 7 alternative roads are  being built in Syunik region. In particular, roads are being built in  the communities of Shurnukh, Vorotan, Bardzravan, Geghanush,  Chakaten. "In addition, we are building a road bypassing the village  of Verin Khotan so that trucks do not pass through the village," the  prime minister said.

Pashinyan asked Minister of Territorial Administration and  Infrastructure of the Republic of Armenia Gnel Sanosyan about the  progress of road construction in Syunik region. The Minister said  that the Tatev- Aghvan road is completely ready. "The main part of  Tatev-Aghvan is not inferior to the same M2, in some places it is  even wider. The main difficulty is certain sections of the Tatev  gorge. For this, the Tatev-Ltsen road is being built to bypass this  section and get to Sisian along a shorter path",  Sanosyan explained.

Quite active work is underway on the remaining six roads, but on  behalf of the Prime Minister, as Sanosyan pointed out, the issue of  building three more alternative roads is being considered. "At this  stage, discussions are underway. Soon we will try to start  construction on these areas," the Minister said.

Earlier, on November 18, Armenian Prime Minister Nikol Pashinyan  assured at a government meeting that there are no isolated villages  in Syunik region.  In particular, according to the Minister of  Territorial Development  and Infrastructures Gnel Sanosyan, we are  talking about 7 roads. One  of them is an alternative to the Goris-  Kapan-Tatev-Aghvani road,  which, according to the minister, has been  completed and commissioned. "The road is in good condition, it is  planned to lay  three-layer asphalt, two layers have already been  laid, in the  spring, if necessary, adjustments will be made and the  third layer  will be laid," he said.  Work is underway on the  remaining 6 roads. In particular, on the  3.5-4 km of the  Kashuni-Bardzravan road, 9.5 km long, ground works  have been  completed. Another road, again in the Goris region,  Tandzaven-  Shurnukh, 13 km long, partly new, on the rest of the work  continues.   At the same time, as Sanosyan emphasized, the village of Shurnukh is   connected with the main road by at least two roads, one is the   current Hot-Vorotan-Shurnukh road, and the other is Hot-Bardzravan,   which is being built and passable for all types of vehicles.  On the   Khot-Vorotan-Shurnukh road, they are completely ready, earthworks   have been done, on 5 out of 10 km, the rest is being improved, he   noted.  Two roads, Kapan-Chakaten and Kapan-Geghanush-Chakaten, are  also  under construction. A few days ago,  construction work began on  the  Geghanush-Chakaten section, which will be completed within two  or  three days. In parallel, the Kapan- Chakaten road will be built,  which  will run parallel to the existing road.  Work continues on the  road from Tatev to the village of Ltsen, 19.9  km long. About 6.5 m  has already been built, two companies are  working on different  sites, design work has been completed, which  speeds up the process  of organizing work. Heating points for drivers  will operate in  winter, the minister said.  The Prime Minister, in turn, explained  that the idea is to build  ground works in all directions leading to  the villages of Syunik as  soon as possible, which will be passable  for all types of machines  all year round. At the same time,  according to him, they will be asphalted when the construction season  begins.  In addition, as Pashinyan noted, a bypass road will be built  in the  spring at the village of Khotanan so that trucks bypass the  village  and do not wear out the road to the village.