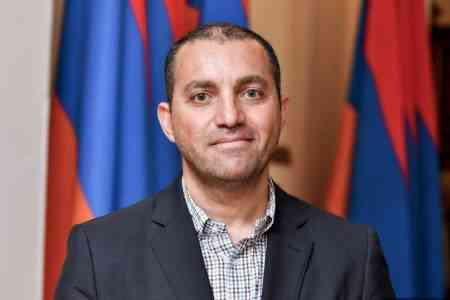 ArmInfo.Armenian Minister of Economy Vahan Kerobyan will take part in the Second Eurasian Congress in Moscow.

According to the official website of the RA government, by the  decision of Prime Minister Nikol Pashinyan of November 30, December  2-3, Minister of Economy of Armenia Vahan Kerbyan will be sent to the  Russian capital, where he will host at the Second Eurasian Congress.

According to the CIS Internet portal, the Congress has established  itself as an authoritative platform for open dialogue between  representatives of the authorities and business of the Eurasian  space.

This year, its participants will discuss practical issues of  enhancing the role of business, business circles, and public-private  partnerships in unlocking the potential of countries' integration -  deepening industrial and technical cooperation, exchanging advanced  technologies, and creating new value chains.

In the program of the Second Congress, much attention will be paid to  transport and logistics issues. At the session "West-East and  North-South Transport Corridors: Development, Export, Integration",  Congress participants will discuss the potential of transport  corridors in the EAEU space, which do not yet meet modern user needs  and do not respond to global challenges.

At a separate session, it is planned to consider the development of  the Single Commodity Distribution System (SCDS) of the EAEU + as a  guarantee of food security in the region and a catalyst for export  activity. Other plenary sessions will be devoted to the consideration  of key investment projects as systemic drivers of economic growth in  the EAEU, as well as issues of the ESG agenda for the EAEU countries  and other topics.