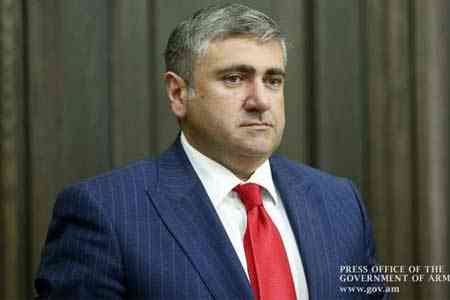 ArmInfo. "For 9 months of 2021, the fulfillment of capital expenditures in Armenia amounted to 68.3% alone or 163 billion drams. A reasonable question arises - how  realistic is the implementation of capital investments in the amount  of 357 billion drams or 200 billion drams more in 2022," opposition  MP from "Hayastan" faction Artur Khachatryan asked on December 6 in  the National Assembly touching upon the main macroeconomic indicators  laid down in the draft state budget of the republic for 2022.

Artur Khachatryan recalled that the Armenian government plans to  ensure a high level of GDP growth mainly through capital investments  in road construction and the construction of new reservoirs. "In the  meantime, the RA government is chronically underperforming capital  investments. So, in 2017-2021 the fulfillment of capital investments  averaged 78%. At the same time, for 2018-2019, the indicator was 74  and 73.5%, respectively," he.

At the same time, according to the MP, it is necessary to be able not  only to carry out state investments, but also to do it with greater  efficiency. Thus, the government plans to attract borrowed funds in  the amount of 230 billion drams for road construction without  appropriate calculations about the economic benefits of such  investments. "This is very similar to an infrastructure trap, when  you raise debt for infrastructure development, but then you cannot  return the borrowed funds," Khachatryan said, adding that all those  roads that can or could contribute to the development of the business  environment have already been built or paved.  To note, if during  2013-2018 the share of capital investments in GDP in Armenia averaged  about 3.2%, and in 2017 the figure increased to 4.3%, then already in  2018 the "shortfall" in capital investments began to gain momentum -  by the end of the year, having decreased to 2.5 %. Despite the fact  that according to the budget for 2020, the ratio of the budget  "capex" to GDP was planned to be increased to 5%, by the end of the  year, capital expenditures amounted to 2.9% of GDP and about 84.6% of  the adjusted plan (about 227 billion drams), against 73.3% in 2019.  At the same time, underperformance is mainly, traditionally,  associated with inadequate implementation of programs carried out on  the basis of external assistance - the implementation of these  programs in relation to the adjusted plan last year was 56.7% (56.1%  in 2019).  Meanwhile, the unclaimed balance of external loans to  Armenia is about $ 1.2 billion.  In the meantime, according to early  calculations by the Luys economic team, a 1.1% failure to capitalize  will "penalize" the GDP growth potential by 0.3 percentage points. In  subsequent years, regardless of the level of capital investments  made, annual GDP growth rates will be lower by an average of 0.3  percentage points.