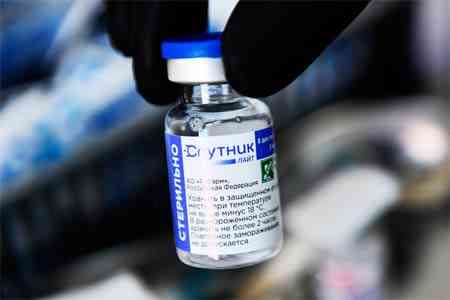 At a specially convened press conference on the occasion of the start of production, Minister of Economy Vahan Kerobyan said that at this stage the possibilities of  exporting the vaccine produced in Armenia are being considered.

"There are no agreements signed yet. But today there are active  negotiations with the countries of the Middle East and Africa," he  said. In turn, director of the "Liqvor" company Sergey Matevosyan  said that to launch the production, the company cooperated with  Russian partners who carried out a technological transfer.  Investments in production were directed by the enterprise itself.  "Today's event is a great success not only for us, but also for our  country," he stressed.

Health Minister Anahit Avanesyan, in her turn, described this as a  big step forward for the pharmaceutical sector in Armenia. She  explained that Sputnik Light will be used in the country as a  booster, a stimulating component that citizens can receive after 6  months from the date of full vaccination. At the same time, the  minister drew attention to the fact that even those citizens who were  vaccinated not only with Sputnik V, but also with other drugs, can  get the Sputnik Light booster.

It should be noted that the "Liqvor" company began its activity in  1991 and was the first non-state company in Armenia producing  medicines, a research and production enterprise "Liqvor" was  founded on the territory of the republican clinical hospital and the  production of intravenous solutions of the first necessity was  organized. The range of the company includes intravenous,  intramuscular injection and ophthalmic sterile products, most of  which have been exported since 1999. The company was the first in the  post-Soviet space to develop and introduce into production an  MoxicinR (moxifloxacin) intravenous drug based on fluoroquinolone of  the 4th generation. "Liqvor" was the first in the Caucasus to receive  a certificate of compliance with European standards (GMP EU) in the  field of sterile medicines production.

According to the statistics committee of the Republic of Armenia, for  10 months of 2021, the pharmaceutical industry in Armenia showed an  increase of 0.9%, amounting to 9.7 billion drams.