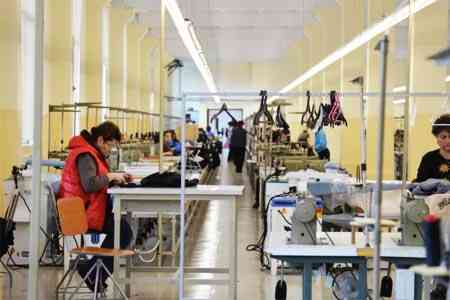 ArmInfo. The revenue of the textile industry in Armenia in January-October 2021 compared to the same period in 2020 increased 2.1-fold, exceeding 1.4 billion drams.  As evidenced by the data of the Statistical Committee of the Republic  of Armenia, such a dynamic was provoked by a tangible increase in the  production of fabrics and bed linen.

According to the source, during the reporting period, Armenian  factories produced 19.9 tons of fabrics, which is 57.9% more than the  volume of the same period a year ago. At the same time, the volume of  bed linen production increased 3.2-fold - up to 116.8 thousands.

Downward dynamics was registered for other types of production. In  particular, the production of tights, leggings, socks and other  hosiery decreased by 1.6%, amounting to 17 784.5 thousands.

Production of carpets and rugs for the reporting period amounted to  2.6 tons, with a y-o-y decline of 59.4%.  The production of jumpers,  pullovers, jackets, jackets (vests) or similar products (knitted /  crocheted) also fell into decline, with a decline in volumes by 63.2%  - to 2,524.1 thousands.