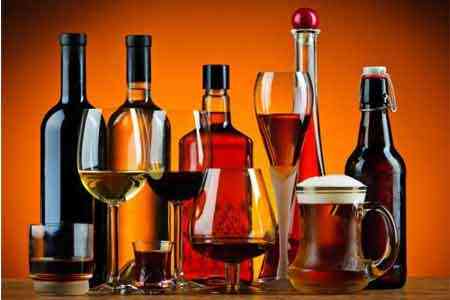 ArmInfo. In Armenia, over 11 months of 2021, the alcohol industry has increased production volumes for all alcoholic beverages produced in the country. This is  evidenced by the data of the RA Statistical Committee.

In particular, 42.3 million liters brandy was produced in Armenia  during the reporting period, which is 24.7% higher than a year ago.

Growth was also recorded in the production of vodka, liqueur and  other alcoholic beverages - by 1.2% to 3.9 million liters.

During the reporting period, beer production also increased - by 21%  to 26.6 million liters.

And the volume of whiskey production in Armenia increased 2-fold ona  y-o-y terms, amounting to 640.3 thousand liters.  It should be  reminded that according to the data of the Customs Service in H1  2021, Armenia exported 1.4 million liters wines with a y-o-y growth  of 56.6% (against a 30.6% decline a year earlier). At the same time,  the customs value of exported wine increased by 55.7% to $ 5.1  million. Traditionally, the main export market for Armenian wine is  the Russian Federation, which accounts for 59% of exports (against  69.8% in the first half of 2020), followed by 10-11% are followed by  Ukraine and the USA, and the remaining volume is supplied to  Kazakhstan, Italy, France, Bulgaria, Belgium, Poland, Lithuania,  Canada, China, Israel, Greece, Czech Republic, United Kingdom,  Australia, UAE, Belarus, Germany, Latvia , Lebanon, Taiwan, Iceland.

In the first half of the year, Armenia increased the export of ethyl  alcohol (strength up to 80 degrees) by 22.9% to 12.2 million liters,  including alcohol-containing liqueur, liqueur and other alcoholic  beverages, while a year earlier there was a decline of 22.7%.  At the  same time, the customs value amounted to $ 95.1 million, which is  14.6% more than a year ago. The lion's share of ethyl alcohol exports  falls on the Russian market with a share of 85.9%, and the remaining  volume was distributed among a number of countries, including  Ukraine, Belarus, Iraq, Georgia and the United States. For some  unknown reason, the RA Customs Service does not publish the export  indicators of brandy separately.