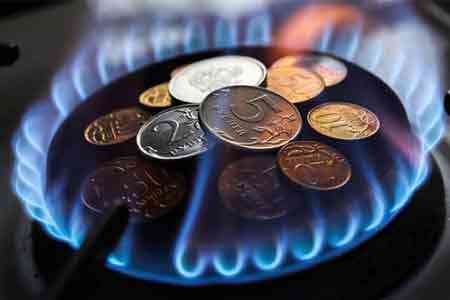 ArmInfo. The process of determining the final gas tariff for consumers will be transparent, and open discussions will be held on the issue at the upcoming PSRC  meetings, the Armenian Ministry of Territorial Administration and  Infrastructures assured.

Yesterday, ArmInfo reported that Gazprom Armenia applied to the  Public Services Regulatory Commission (PSRC) of the Republic of  Armenia with a request to revise gas tariffs. The regulator has 80  days to consider the application, and if approved, the new tariff  will come into force on April 1, 2022. It was noted that in  accordance with the additional agreement signed between Gazprom  Armenia CJSC and Gazprom Export LLC on the supply of natural gas to  the Republic of Armenia dated October 29, 2021 for 2014-2021, from  April 1, 2022,  the actual price of natural gas supplied to the  Republic of Armenia from the Russian Federation is set at $165 per  thousand cubic meters with a net calorific value of 7900 kcal/m3 and  $177.53 per thousand cubic meters with a net calorific value of 8500   kcal/cu.m.  "At the same time, if the actual average monthly mass of   the net calorific value of natural gas is higher or lower than 8500  kcal/m3, the price will change accordingly, in direct proportion to  this change," the document says. Gazprom Armenia proposed both a  single price for all consumer groups and a formula for calculating  tariffs depending on the monthly adjustment of the actual gas  calorific value. "Secretly from the public, political and  professional circles, another gas agreement was signed, according to  which, from April 1, 2022, the price of natural gas will increase  both at the border and within the country," Economist Suren Parsyan,  responsible for the economic research office of the ARF  Dashnaktsutyun Bureau, wrote on his Facebook page, also stating the  inevitability of the deepening of the social crisis due to the rise  in gas prices.

Thus, responding to "contradictory and unfounded publications in the  media" about the "secret gas agreement", and "in order to prevent the  spread of manipulative comments and disinformation", the ministry in  a widespread statement reports that the issue of gas prices at the  border in 2022 is regulated by an additional agreement, concluded  between Gazprom Armenia CJSC and Gazprom Export LLC back in 2013.   According to the additional agreement, the gas price at the border in  2022 will remain unchanged.  The specified additional agreement was  signed on October 29, 2021. And according to the agreement of 2013,  which is a public document, the parties agreed and approved the gas  price adjustment formula based on the actual calorific value of gas,  which will come into force on April 1, 2022.

It should be noted that, in its application, Gazprom Armenia, in  particular, offers both a single price for all consumer groups and a  formula for calculating tariffs depending on the monthly adjustment  of the actual calorific value of gas. The proposed single weighted  average tariff will be $282.6 per 1,000 cubic meters of gas for 8,500  kilocalories. In drams, this will amount to 135 thousand 649 drams  (the current weighted average tariff is $266.71). That is, Gazprom  Armenia proposes to increase the weighted average price by $15.89  (including VAT) per 1,000 cubic meters of gas by 8,500 kilocalories.   If the energy value is below 8500 kilocalories per cubic meter, the  price of gas will decrease proportionally, if it is higher, it will  increase.

Meanwhile,  head of PSRC Garegin Bagarmyan previously reported that  in 2021 the energy value was 8,300 Kcal/cubic meters and more (up to  8,500 in some months). Referring to the recently reached agreement on  maintaining the base gas price at the border for the next 10 years at  $165, in return for which Armenia pledged to ensure the profitability  of the Hrazdan-5 thermal power plant, owned by Gazprom Armenia, and  increase the tariff for it so that the station receives an additional  annual income of $31.79 million, Baghramyan said: "If our partners  raise the issue of changing the tariff of $165, then we, in turn,  will be able to change this $31.79 million."