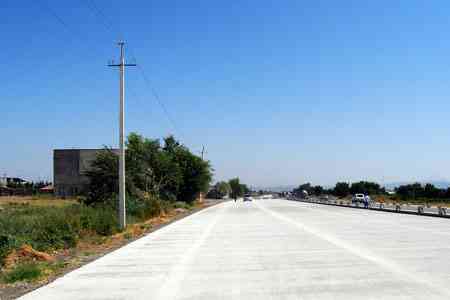 ArmInfo. The project for the  reconstruction of the 32-kilometer section of the Kajaran-Agarak of  North-South transport corridor received a positive conclusion from  the State Comprehensive Expert Commission.

According to the press service of the Road Department Foundation,  under the chairmanship of head of Urban Development Committee of  Armenia Armen Ghularyan, a meeting of the State Comprehensive Expert  Commission on the design documentation of the "Kajaran-Agarak road  section of the "North-South Road Corridor Investment Program:  Tranche 4." was held.

"The project for the reconstruction of the 32-kilometer  Kajaran-Agarak section: Tranche-4, was discussed. The reconstruction  work is financed by the Eurasian Fund for Stabilization and  Development, as well as by the state budget of the Republic of  Armenia. The reconstructed section of the road with a length of 32 km  will be of the second technical category with an estimated speed of  80 km/h. The section of the road will include 18 bridges, 3 tunnels,  the longest of which will be 7.5 km. Heavy vehicles will have their  own lane, which will facilitate the transportation of goods," the  report says.

Members of the commission presented their observations on the  project. Particular attention was paid to the issues of compliance of  the entire section of the road with the requirements of building  codes and seismic resistance of all engineering structures.

The North-South project will reduce the distance from the Iranian  border to the Georgian border from 556 to 490 kilometers. The road  will significantly facilitate access to the Black Sea not only for  Armenia, but also for Iran. The project will provide access to the  Black Sea and European countries through the territory of Armenia  (Meghri-Kapan-Goris-Yerevan-Ashtarak-Gyumri-Bavra) and Georgia. The  corridor was originally scheduled to be completed in 2019. The cost  of the program was constantly revised upwards.  Meanwhile, in  September 2012, when the construction of the highway started, the  amount pointed out by the representatives of the Armenian government  was many times less - 962 million dollars.

On September 24, 2021, the Government of Armenia approved this  investment program within the framework of the North-South Road  Corridor Investment Program: Tranche 4 .and the specifics of the  organization of the pre-qualification procedure and launched the  implementation of the program for the construction of the  Sisisan-Kajaran road section in the Syunik region of the republic.  According to preliminary data, the cost of the program only for the  construction part will be about $1.5 billion. Its implementation  provides for active cooperation with the international partners of  the Republic of Armenia.  On February 17, 2022, at a government  meeting, RA Prime Minister Nikol Pashinyan informed that Armenia had  announced a tender for the preliminary qualification of the  Sisian-Kajaran section of the North-South transport corridor. 6 years  are allotted for the implementation of the road, it is planned to  build a new road of the II technical category with an estimated speed  of 100 km / h, with a total length of about 60 km, including 4.7 km  of bridges and tunnels with a total length of 12.5 km., the longest  of which the Bargushat tunnel will be 8.6 km long. As a result, it  will be possible to reduce the length of the Sisian- Kajaran road by  about 58 km, increase the average speed by 50 km/h, set it within 100  km/h, reduce travel time by about 1.5-2 hours, and improve comfort  and movement safety.