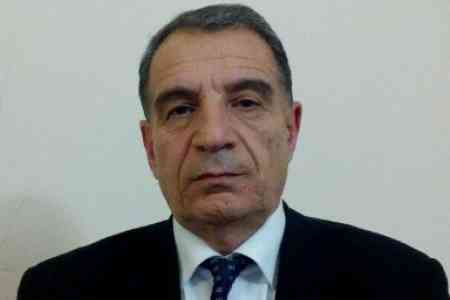 ArmInfo.The establishment of direct Armenian-Turkish trade and economic contacts changes the geo-economic balance. And it is highly important to assess these changes from the point of view of the regional and world powers, each of the South  Caucasus states and all the neighboring states, believes Mr Ara  Karyan, Associate Professor at the Russian-Armenian (Slavonic)  University.

No doubt, of importance is the unblocking of transport communications  in the South Caucasus, re-opening of the Armenian-Turkish border and  establishment of direct trade and economic relations between Armenia  and Turkey, as well as, to an extent, Armenian-Azerbaijani economic  relations involving cargo transportation, energy carriers and  electric energy. The primary reason is ensuring security and  stability in the South Caucasus at the regional and international  levels - the three official trilateral statements by Russia, Armenia  and Azerbaijan after the Artsakh war, which deal with the unblocking  of the infrastructure, and the practical efforts by the vice-premiers  of the participating states; direct negotiations between the Armenian  and Turkish political leaders over the unblocking of the regional  transport communications and re-opening of the Armenian-Turkish  border.

According to Mr Karyan, the unblocking of transport communications  and re-opening of the border will inspire hopes for formation of an  entire economic region with common norms based on international  conventions and rules of fair business relations.

Possible benefits and risks to the regional economies, their  potential competitiveness after the Armenian- Turkish border is  re-opened, as well as socio-demographic and other consequences of  reopening of the Armenian-Turkish border should be assessed, the  expert says.

The Armenian-Turkish political and diplomatic relations are poor now.  Therefore, Mr Karyan's question is:  will the political and  diplomatic processes will have their impact on the process of  establishment of direct economic ties between the states launched  this January with the participation of Armenia and Turkey and through  Russia's mediation.

However, establishment of direct trade and economic relations between  turkey and Armenia will contribute to relaxation of hostility and  gradual construction of peaceful relations between Armenia and  Turkey, which a top priority both for them and for the other regional  states. On the other hand, the sensitive aspects should be considered  as well. Turkey rejecting the historical fact of the Armenian  Genocide, the unsettled Artsakh problem, Turkey's involvement in the  44-day war remain a heavy burden and bring historical, legal, social  and emotional aspects into the relations and cannot be ignored in  establishing direct Armenian- Turkish economic relations.