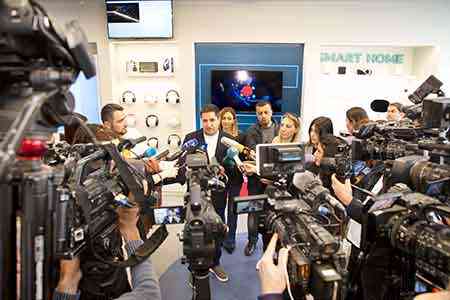 ArmInfo. One of the leading telecommunications companies Team Telecom Armenia has officially completed its rebranding process, which began with the acquisition of  100% of the shares of Veon Armenia. Henceforth, the company moves to  the stage of active implementation of its strategic programs. On May  3 during the opening of the head service center of Team Telecom  Armenia on Northern Avenue, General Director of the company Hayk  Yesayan said.

In such a short time, the company has done a tremendous job,  completing the rebranding process in all 78 branches throughout the  Republic, equipped with innovative solutions.

"Almost 1.5 years ago we acquired Beeline, and during this time a  complex teamwork was carried out, thanks to which the company was  finally renamed into Team Telecom Armenia",  he noted. According to  the General Director of the company, the rebranding was carried out  by Team Telecom Armenia specialists. When asked why the brand was  named Team, the head of the company explained that this name reflects  the spirit and thought that make it possible to move forward. In  particular, he explained that the particle TE is derived from the  word "telecom", and AM - "Armenia".

According to Yesayan, the company currently provides the largest  volume of services in the country's telecommunications market.  However, the changes will be permanent and the range of services will  be expanded. In particular, it was noted that during this time the  company launched the TeamTV digital television platform and is  developing the TeamPay payment application.

During the event, the head of the company also touched upon the newly  introduced New Generation Network (NGN), which will allow each  subscriber to use the Internet at a speed of 25 Gb /s. According to  him, the company aims to provide decent conditions for each  subscriber to communicate with the digital world through this  network. Yesayan said that the network is already operating in  Hrazdan, Jermuk, Kajaran, Gndevaz, and will soon be launched in  Dilijan. In Yerevan, about 10,000 subscribers in the administrative  district of Davtashen and 42,000 in Arabkir already use the advanced  NGN network.  Further works on the implementation of the network will  be carried out in the center of the capital.

Speaking about the country's telecommunications market, Hayk Yesayan  noted that Armenia, in terms of the level of services provided to the  final consumer, has moved forward not only in the region, but  throughout the world. As an example, he noted that the availability  of the Internet in Armenia is better solved than in some European  countries and the United States. However, from the point of view of  the corporate segment, the head of Team Telecom Armenia noted that  there is still a lot of work to be done in this direction. , he concluded.

On October 29, 2020, the deal for the acquisition of 100% of the  shares of Veon Armenia by the founders of Team Telecom Armenia, the  brothers Hayk and Alexander Yesayan, was completed. As a result, one  of the largest telecommunications companies in the country once again  became Armenian.