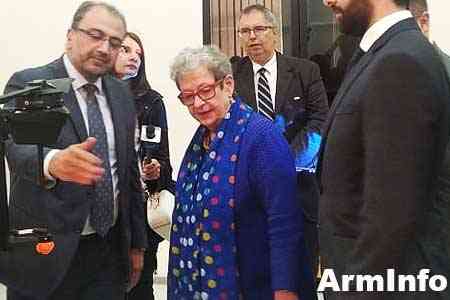 ArmInfo. The Precision Agriculture Center with a drone training laboratory was opened today at the National Agrarian University of Armenia

The laboratory was set up and furnished within the framework of the  European Union-funded Green Agriculture Initiative (EU-GAIA) project,  which is co-funded by the Austrian Development Cooperation as well as  with the financial assistance of the Pharm Credit Armenia company.

According to ANAU Rector Vardan Urutyan, the opening of such an  innovation center is an important achievement not only in terms of  education, but also the development of the digital agenda of  agriculture.  Noting the lack of agrotechnical personnel in Armenia,  Urutyan noted that the presence of such laboratories will train the  specialists necessary for the development of innovative, digital and  precision agriculture.  "We have a huge potential in agriculture,  which can only be realized with new knowledge and through the use of  innovative technologies, which will ensure the breakthrough  development of the agricultural sector," he stressed.

The rector noted that last year the "Precision Agriculture" master's  program was launched at ANAU, which will be available for  undergraduate students next year.  For her part, the EU Ambassador to  Armenia, Ms. Andrea Wiktorin, noted that in terms of challenges  related to food security, the development of agriculture is becoming  increasingly important. She stressed that there is a need to increase  the interest of young people in agricultural specialties. "We must  help them understand that agriculture is an innovative area, a  high-tech area that can be profitable," she stressed.  Noting the  high potential of Armenia's agriculture, the EU Ambassador stressed  that the country is moving in the right direction, implementing  reforms in education and other areas. "By supporting the  implementation of such initiatives, we want Armenia's agriculture to  meet all world requirements in the future," the diplomat said.  The  innovation center created at the Agrarian University will cooperate  with laboratories in the branches of the university in Gyumri and  Vanadzor, which carry out land analysis.  Technological equipment and  functional accuracy of agricultural drones, presented in the  laboratory of the Agrarian University, will allow crop spraying in  areas ranging from 10 to 17 hectares. In addition, smaller drones  were presented in the laboratory for pinpoint detection of infected  crops. It is important that the drones were developed by the Armenian  DJI company.  According to Emma Petrosyan, responsible for public  relations of the Austrian Development Agency, the total amount of  funding for the initiative amounted to 11.7 million euros, of which  9.7 million euros were allocated from the EU, and 2 million euros  from the Austrian Development Cooperation.