UBA: Volumes of lending to the Armenian economy have grown in almost  all areas 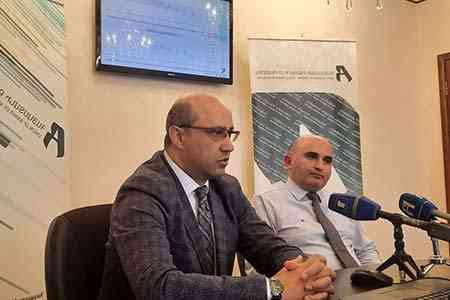 ArmInfo. The volumes of lending to the Armenia's economy in Q1 2022 have grown in almost all areas. Executive director of the Union of Banks of Armenia (UBA) Seyran  Sargsyan announced on May 13 during a press conference.

He stressed that at the end of Q4 2021, the Armenian banking system  registered some decrease in credit investments, and only the  mortgage-lending portfolio registered a positive trend.

However, already in Q1 2022, loan investments increased by 123  billion drams or 3.1%, reaching 4.1 trillion drams. Noting that the  share of lending to the economy somewhat prevails over the share of  lending to individuals - 46% versus 44%, Sargsyan said that in the  reporting quarter, the volume of financing for industry increased by  6.4%, trade - by 4.7%, agriculture - by 3.4%, services - by 2.7%,  construction - by 1%. The decline in lending was recorded only in the  field of transport and communications - by 8.2%.

At the same time, the head of the UBA indicated that the volume of  retail lending exceeded 1.8 trillion drams, in the structure of which  consumer loans, having increased by 1.2% over the quarter, amounted  to 834.4 billion, and mortgages exceeded 698 billion with an increase  of 6.6%.

Regarding the foreign exchange component, Sargsyan noted that over  the past year, AMD loans have prevailed over foreign currency loans,  while earlier, according to the results of Q1 2022, the share of AMD  loans amounted to 55%, and foreign currency - 45%.

Regarding non-performing loans, answering the question of an ArmInfo  correspondent, Sargsyan noted that no special changes were registered  in this indicator in the first quarter. Noting that the share of non-  performing loans in the loan portfolio is within 6%, he drew  attention to the rather low level of this indicator in Armenia  compared to other countries.