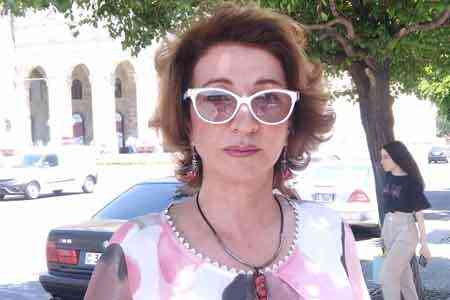 ArmInfo.Since April, due to the transport collapse that has formed on the territory of Georgia, more than 35 factories for the production of alcoholic beverages have  actually been idle in Armenia. The reason is the impossibility to  import a complete set from Russia, and, accordingly, it is impossible  to export finished products there.

Marina Arakelyan, commercial director of the Van 777 wine and brandy  factory (Ararat region), who initiated the exporters' action,  expressed such an opinion in an interview with ArmInfo near the  government building. She noted that Armenian export-oriented  enterprises are currently experiencing a severe crisis - collapse.

Arakelyan said that according to the situation today, there are more  than 3 thousand heavy vehicles with Armenian, Russian and Belarusian  license plates on the bypass road, starting from the Sadakhlo  checkpoint to Kazbeki, which are not allowed to enter the  Russian-Georgian checkpoint "Upper Lars". Moreover, according to her,  there are many cases when vehicles with Armenian and Russian license  plates are sent back. "Without explaining the reasons, two cars  loaded with our products were returned back, one from Sadakhlo, and  the second from the Kazbeki point," the entrepreneur said.

She indignantly stressed that the Georgian transport authorities do  not want to get in touch, and customs officials refuse to give any  explanation.

<I tried to talk with the deputy head of the Georgian Customs  Service, with the shift supervisors. They just say they can't do  anything. We also wrote to the customs attache of the Armenian  embassy in Georgia. But since April 8, this issue has not yet been  resolved. No one can answer anything>, Arakelyan said.

The specialist noted that due to the resulting transport collapse,  Armenian producers may lose their sales markets. In this vein, she  said that Armenian product manufacturers pay for the availability of  their goods on the shelves of retail chains, and they are subject to  penalties for delaying deliveries. <The question is who will  compensate these fines?>, Arakelyan asked.

At the same time, Arakelyan stressed that such an outcome is  beneficial for exporters of other countries, since they can take  "vacant" shelves of manufacturers from Armenia, as a result of which  Armenian alcoholic and other products can simply be expelled from the  Russian market.

On top of all this, due to the collapse, Armenian exporters faced new  logistical difficulties. Due to the lack of transport, transportation  costs more than doubled. If last year at the same time a truck could  be sent to Russia for an average of$1.7 thousand, then this year,  according to her, tariffs have increased to $4-4.5 thousand.

Due to the absence of any response from the competent authorities,  Marina Arakelyan initiated a rally near the government building,  which was joined by several dozen exporters. "There is only one  requirement for the authorities - to urgently solve the problem - to  give Armenian cars the same green road as Georgian or Turkish ones.  The government must understand that Armenia has no alternative to the  Russian market, this is the number one market for us," she concluded.

It should be reminded that, according to various estimates, up to  3,000 heavy trucks from Armenia, Georgia and Turkey are waiting to be  allowed to enter Russia through Georgia.

In connection with the situation,  Minister of Economy Vahan Kerobyan  made a statement, nothing that work is underway to open a separate  corridor for Armenian trucks. In addition, the ministry recently  announced the launch of a ferry service in June of this year that  will link the railway system of Armenia with the Eurasian one.

In a conversation with an ArmInfo correspondent on May 30, the  Armenian customs attache at the Upper Lars checkpoint, Aram Tananyan,  noted that the accumulation of cars is due to the limited capacity of  the checkpoint. He explained that due to a significant increase in  the flow of goods from Turkey to Russia, Upper Lars cannot withstand  the load.