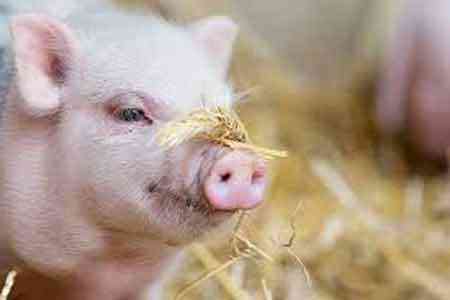 ArmInfo. Russia has significantly increased the export of pork to Armenia. This was  announced on the sidelines of the St. Petersburg International  Economic Forum (SPIEF- 2022) by head of Rosselkhoznadzor (Federal  Service for Veterinary and Phytosanitary Surveillance) Sergey  Dankvert.

In particular, according to him, in the first half of the year, the  Russian Federation supplied 427 tons of pork to the Armenian market,  which is 8-fold higher than the figure of a year ago.

"I think we quite underestimate the potential of countries that were  part of the CIS and the Eurasian Community. And the amount of pork  that we have supplied can be much more ", he said.

In particular, the head of the Rosselkhoznadzor noted that during the  reporting period, Russia exported a total of 61 thousand tons of pork  to the markets of the EAEU countries, of which the lion's share (25  thousand tons) falls on Belarus, 4.5 thousand tons - Kazakhstan, 290  tons - Kyrgyzstan. At the same time, he pointed to an increase in  supplies to the Mongolian market.

It should be noted that according to the data of the Customs Service  of the Republic of Armenia, for the whole of 2021, the volume of pork  imported from the Russian Federation to Armenia amounted to 557.8  tons, which is 5% lower than the indicator of a year ago. At the same  time, the customs value increased by 32% to $1.7 million.

According to the RA Statistical Committee, the volume of meat  production in Armenia (processed and chilled) in 2021 amounted to  about 86 thousand tons, with a y-o-y growth of 0.7%.

The St. Petersburg International Economic Forum, organized by the  Roscongress Foundation, takes place from June 15 to June 18. "New  world - new opportunities" is the theme of 2022 Forum.