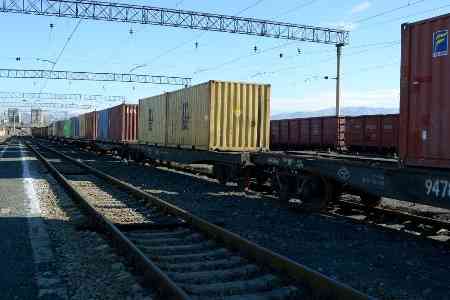 ArmInfo. Members of the Eurasian Economic Union (EAEU) are ready to intensify work on the development of Eurasian transport corridors and routes. According to  TASS, Mikhail Myasnikovich, Chairman of the Board of the Eurasian  Economic Commission (EEC), told reporters on Tuesday following a  meeting of the Eurasian Intergovernmental Council.

"A decision has been made to intensify work on the development of  transport infrastructure, including the Eurasian transport corridors  and routes," Myasnikovich said. In particular, according to him,  there is a proposal to "lay the Southern Railway in Armenia,  reconstruct the M-1 highway for the development of the Europe-Western  China automobile route with a branch to the Republic of Belarus,  build the Europe- Western China railway and the  China-KyrgyzstanRepubli- Uzbekistan railway ".

Myasnikovich also said that during the meeting held in Minsk,  proposals were made "how to strengthen industrial cooperation, which  is reflected in the relevant documents." "The main thing is that  these should be high-tech industries, and not just support for what  we have," the head of the EEC explained. According to him, today "a  serious transformation is being carried out both in the world capital  markets and in the currency markets of our states". "This opens up  additional opportunities as sources of financing for development  programs," the head of the EEC noted.