Orion Summit 2022: The main challenge for Armenia is a change in  mindset 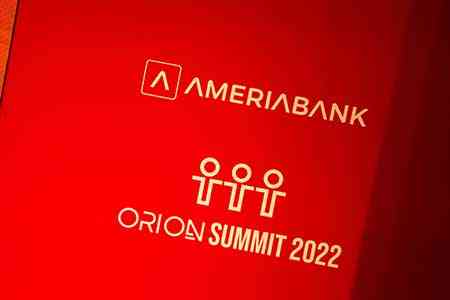 ArmInfo. Orion Summit 2022 kicked off in Armenia. Ameriabank, a leading fintech organization, is the platinum sponsor of the Summit.  The Summit is held with the aim  of supporting the ecosystems in Armenia, identifying problems and  finding solutions for the development of these systems, which will  ultimately contribute to the growth of the economy.

According to founder of Orion WorldWide Innovations Emma  Arakelyan, this year the company worked with 5 Armenian startups,  which,  in a short period of time, having passed the acceleration  in the New York BAJ Accelerator, showed an impressive growth  from 10 to 200 times. Orion intends to bring these startups to the  international market and help them raise funds. "We want to show the  world that Armenian startups can grow quickly, meet international  standards, and help them present their innovations to the world," she  said. According to Arakelyan, the selected startups represent such  segments as e-commerce, biotech, artificial intelligence and human  resource. Answering a question from an ArmInfo correspondent, she  stressed that all the programs and activities carried out by Orion  have one goal - to change the mindset in Armenia. <The challenge of  developing ecosystems in Armenia lies in the mindset that needs to be   changed. In addition, one should be more prepared to present oneself  to the world with courage, since Armenian innovations have a high  level on the world stage>, the founder said. In this vein, she noted   that over the past 8 years, in terms of the level of development of  startups, Armenia occupies good places in various ratings.

Co-founder of Orion WorldWide Innovations Diana Arzumanyan, recalling  that last year, within the framework of its programs, Orion trained 3  Armenian startups, for which they managed to raise $27 million, and  announced plans to double this amount this year. In particular, she  noted that the 5 startups selected this year have the potential to  become unicorns (the unofficial name of the company, whose  capitalization of assets has reached $1 billion - ed note).

Artem Shamtsyan, Director of Innovation and Digitalization at  Ameriabank, noted: "Today we are on the path of digital  transformation, and we see our growth within the ecosystem approach.   By participating in such events, and being the main sponsor, we  attach importance to both the development of innovative startups  based on the ecosystem approach, and the number of investors  operating within the ecosystem. The main thing is to create digital  platforms that include both financial and non-financial services -  this will become an ecosystem. In other words, the bank is proactive  and is transforming into an ecosystem in several areas, incl. with  access to fintech startups. The bank is already a partner for both  newly created and operating startups. We are providers of not only  financial services, but also ecosystem services that allow  companies, incl. startups to grow and scale>.

Ameriabank's Legal Director David Sargsyan, in turn, said that  Ameriabank supports the Summit, as it has always been an innovative  company. "This is one of the important events that will contribute to  the development of ecosystems. Our company implements several  programs aimed at creating ecosystems that will increase the  availability of products for customers. This will lead not only to  the active operation of the systems, but also to reduce time costs  and costs.  As a result, consumers will be able to get their  preferred product in the shortest possible time, and businesses will  be given the opportunity to reduce time to market (the time that  passes from the moment a product is created to the start of its sales  - ed. note)>, he said, noting that Ameriabank has developed several  ecosystems which, after the completion of certain procedures, will be  presented to the market.

During the Summit, panel discussions were held, in which Artem  Shamtsyan, Director for Innovation and Digitalization of Ameriabank,  David Sahakyan, Deputy Minister of High-Tech Industry of the Republic  of Armenia, Martin Galstyan, Chairman of the Central Bank, Diana  Arzumanyan, Director and Co-Founder of Orion WorldWide Innovations  and others, took part in the event. The main speaker of the event was  a well-known expert in the field of investment banks and financial  consulting Mark Chenyan.

Orion Worldwide Innovations was founded in 2017 in the USA. The  company has offices in New York and Yerevan and cooperates with  networks of companies and investors operating around the world. The  company's activities are aimed at developing startups, helping them  enter the US market, improving customer acquisition strategies,  supporting them in maintaining competitiveness, etc.

Ameriabank, being the largest financial institution in Armenia with  assets of over AMD 1 trillion, plays an important role in the  country's economy. Ameriabank, being a dynamically developing  universal bank, provides a wide range of innovative banking services   through a multifunctional platform, with a focus on digital  products.  The Bank adheres to a client-oriented policy, providing a  high quality of service and using modern banking experience in an  evolving digital environment. Ameriabank is committed to the  principle of responsible business conduct and contributes to  Armenia's transition to an environmentally sustainable future. Among  Armenian banks, only Ameribank's shareholders include such  institutional investors as the European Bank for Reconstruction and  Development (17.74%) and the Asian Development Bank (13.93%).   Ameriabank holds the leadership in the banking system of Armenia in  terms of key financial indicators (assets, liabilities, loan  portfolio, net income, capital).