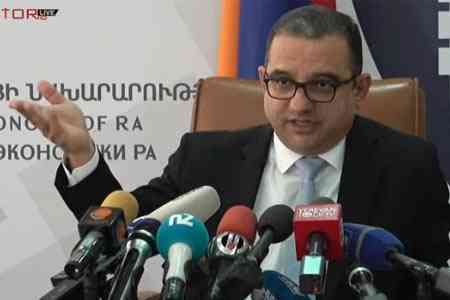 ArmInfo.The Armenian government has revised its budget revenue forecast for this year, increasing the budgeted revenues by about $100mln. The authorities have announced  their intention to implement capital investment programmes for the  early 2023.

Armenia's Minister of Finance Tigran Khachatryan stated that the tax  revenues will exceed the target for the first half of 2022. As of  June 22, tax revenues (tax revenues and state duties) totaled AMD  911bln - 30% as much as last year. With the AMD 38bln paid as taxes  on ore concentrate (dressed ore) (the tax was not in effect in the  first half of 2021) deducted, the tax revenues are expected to  increase by about 25%.

Among the factors explaining the increase are more efficient tax  administration, increased income tax payments this year based on the  2021 financial results, as well as taxes on ore concentrate (dressed  ore).  The government-forecast amount was AMD 50mln, with AMD 38bln  collected. The inflation played its role as well - 9% inflation this  May against last May, whereas the budgeted inflation was 4% (+/-  1.5%).  As a result, larger amounts of a number of taxes,  particularly VAT, were paid. So the government plans to increase the  budgeted revenues by AMD 40bln.

The extra budget revenues allow the government to allocate more funds  to education, healthcare and physical infrastructure programmes that  are to be launched in the early 2023.

As of this April it was clear the tax revenues would exceed the  target by AMD 30bln. However, the government did not revise the  forecast then, but decided to wait until the end of the first half of  the year.