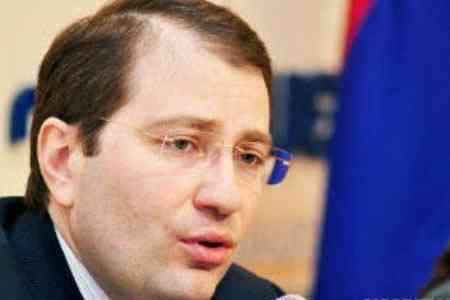 ArmInfo.Armenia can achieve economic growth of  7-9% in 2022. Well-known Armenian economist, former Minister of  Finance of Armenia David Sargsyan, expressed this opinion on his  Facebook page.

According to him, already today Armenia registers economic growth of  9%, which exceeds even the forecast level of 5% positively revised by  the Central Bank. <If you follow the classic textbook truths, then  the world should enter into an economic crisis, and today's economic  growth in Armenia should at least slow down or become zero next year.   However, we live not only in an unstable environment, but also in a  completely "new" era. There has never been such a situation in world  economic history. And this means that there is a high probability  that the development of the economy will not be the same as described  in textbooks. Moreover, the nature of crises is such that they come  when no one forecasts them. And today everyone is forecasting a  crisis and it is very likely that the world economy will not  experience a crisis, and the Armenian economy will continue to grow  at a high pace>, Sargsyan stressed.

Meanwhile, the financier recalled that in terms of economic  development on a global scale, the world lives in a very unstable  environment. On the one hand, the global currency crisis and the  policy of quantitative easing by the central banks of developed  countries for almost a decade, and this is simply "printing money",  led to the highest global inflation in 40 years. On the other hand,  the Russian-Ukrainian crisis and unprecedentedly large-scale  sanctions threaten to deepen global inflation and slow down global  economic growth. All this is due to the increase in interest rates by  the national banks of developed countries and creates even greater  risks for global economic growth.

The IMF is in no hurry to update its forecast for the growth of the  Armenian economy in 2022, leaving it at 1.5%. However, the World  Bank, on the contrary, improved the forecast for Armenia's GDP growth  from the previous 1.2% to 3.5% (against the actual 5.7% growth in  2021). And according to the updated forecast of the Central Bank of  the Republic of Armenia, this figure will reach 5%.

It should be noted that according to statistical data, economic  activity in Armenia in January-April 2022 increased by 9.4% per  annum, against the backdrop of an increase in exports and imports by  25.2% and 39.1%, respectively. It is noteworthy that the current  growth in economic activity turned out to be higher than the rates of  the pre-Covid similar period. In terms of industry, in January-April  2022, growth was registered in all sectors, and the service sector  and the energy complex are more noticeable. In April 2022 alone  compared to April 2021, economic activity increased by 8.8%. Growth  was observed in all sectors:  the service sector  (27.1%),  construction  (15.6%), trade  (8.6%), energy complex  (5.8%), and the  industrial sector (1.2%).