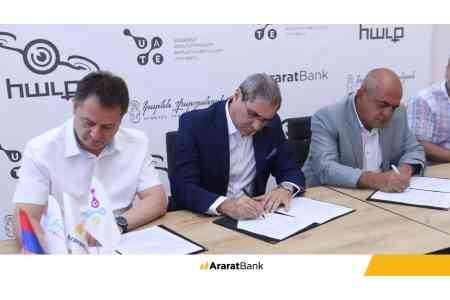 ArmInfo. ARARATBANK OJSC will act as a major sponsor of the "Hawk 2" contest of unmanned aerial vehicles (UAVs), which is implemented by the Educational Foundation named after Karen Vardanyan and the Union of Advanced Technology Enterprises (UATE).

As Suren Vardanyan said, the contest will be held on September 10 and September 11 in Lernapat village (Lori region), where the construction of an airport for UAVs is to begin. According to him, 106 teams submitted applications for participation, of which 6 are professionals, 11 are amateur or newly created organizations, and 89 are represented by school teams. Whereas a year earlier, when the contest was held for the first time, the participants were 16 school teams, 6 amateur and 2 professional teams.

In a conversation with ArmInfo correspondent, Vardanyan noted that one of these days the Foundation should receive confirmation from the Ministry of Territorial Administration and Infrastructures in order to start the construction of the airport building. "The design work has been completed, and once we receive the necessary documents and start construction in July, we will complete in November," he said.

Chairman of the Board of Trustees of Karen Vardanyan Educational Foundation, Avetik Kerobyan added that this year the number of participants from the regions of Armenia has gone up, while the previous year the teams from Yerevan prevailed. He also said that following the results of last year's contest, it was decided to organize preparatory courses for the production and operation of UAVs, in which 57 people took part. As a result, new teams were formed and new specialists were involved. It is noteworthy that the number and quality of participating teams is growing rapidly. In particular, according to Kerobyan, a number of teams of students, as a result of retraining, moved to the class of "amateur" teams, and those, in turn, moved to the team of professionals.

Chief Executive Officer of ARARATBANK OJSC Mher Ananyan, in turn, noted the importance of supporting such initiatives, which are carried out for the benefit of the nation.

Mher Ananyan noted that the recent sad events showed that having bright, creative ideas, Armenia did not always succeed in generating them and getting results.

In a conversation with ArmInfo, UATE Executive Director Hayk Chobanyan noted that the high-tech sector should develop rapidly in Armenia, since this is one of the main areas that can solve security issues.  In this vein, he attached importance to stimulating engineering and technology education, creating technology start-ups.  "We need popular participation in such initiatives to secure a sustainable future," he said.

Chobanyan also pointed to a growing trend in the number of those interested in the participation in such programs and contests. In particular, according to the results of the Hawk contest held for the first time in 2021, the first UAVs have already been manufactured, but from year to year, as he assured, it will be possible to register more serious results. "Perhaps in the near future, in the context of 1-2 years, we will position ourselves in the world as a country that provides the best solutions in this area," he said.

When asked whether the state is involved or encourages such projects, Chobanyan noted that at this stage this cooperation is exclusively of the private sector. "But I believe that the state will join at some stage and will not be able to stand aside, since this is a national program," the Head of UATE said.

It should be noted that the contest for school teams will be held on September 10, and the contest for amateurs and professionals on September 11. The teams are assigned a task of producing and testing UAVs: navigating in the area, identifying and distinguishing objects; delivering goods; and spraying farmland.  In the summer of 2021, the Union of Advanced Technology Enterprises (UATE), the Educational Foundation named after Karen Vardanyan made a statement on fundraising for the construction of an UAV airport in the village of Lernapat, Lori region. In a record 20 days, joint efforts managed to raise the funds necessary for the construction of the complex and infrastructures. According to preliminary estimates, the start of construction required financial investments in the amount of $110,000.

In October 2020, the family of Karen Vardanyan, the leading IT expert in Armenia, the founder of the "Armath" engineering laboratories, who passed away in 2020, issued a statement in which they announced their intention to initiate a fundraising for the production of unmanned aerial vehicles (UAVs), which was the big dream of Vardanyan himself.

Araratbank was founded in 1991. The Bank provides innovative and high-quality services to both individuals and legal entities, using state-of-the-art technologies and creating a unique business culture in the bank-client relationship. The bank's branch network includes 51 branches.