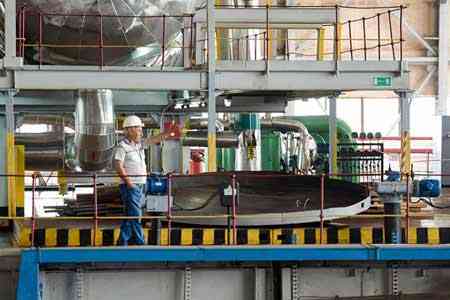 ArmInfo.Within the framework of the Memorandum of Understanding concluded between the HAEK CJSC and Rusatom Overseas JSC, a process of discussing the project for the  construction of a new power unit in the territory of the Republic of  Armenia has commenced.

This was reported by the press service of the  Armenian Nuclear Power Plant (ANPP).  According to the source, a  regular meeting of the established joint working group was held on  June 23, 2022, chaired by the Deputy Minister of the RA Territorial  Administration and Infrastructures Hakob Vardanyan. The Russian  delegation was headed by Victor Kolesnikov, the project manager,  adviser to the president of "REP" JSC. According to the agreement  reached at the first meeting, the agenda included discussion of the  structure of the preliminary feasibility study (PFS) on high power  WWER, the Terms of Reference for the feasibility study performance  and approaches to the applicable regulatory technical documents and  licensing.

In the course of the discussions, an option of a typical standard  WWER unit, with a capacity of 1,000-1,300 MW that has passed all the  relevant tests, was considered.

Representatives of the RA Committee for Nuclear Safety Regulation  were also present at the meeting, who, having studied the proposals  of the Russian party, presented the RA licensing procedure for the  design of nuclear installations, site selection, construction and  security safeguards.

During the discussions, having received answers to various questions,  the parties emphasized the effectiveness of the meeting, which is  already a certain significant step in the process of project  implementation.  It should be reminded that earlier projects for the  construction of nuclear power plants with an average capacity of 600  megawatts and small modular stations with a capacity of 50 megawatts  were actively discussed in Armenia.