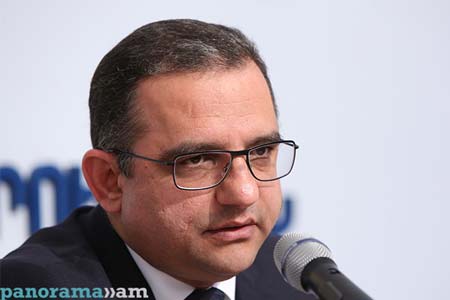 ArmInfo. The business community of Armenia called on the government to find assistance mechanisms in connection with the revaluation of the dram.

Representatives of the business segment expressed their demands  during the meeting with Economy Minister Vahan Kerobyan and Finance  Minister Tigran Khachatryan.

According to the press service of the Ministry of Economy, earlier a  number of Armenian entrepreneurs addressed in an open letter to the  state departments of the Republic of Armenia and the Central Bank, in  which they spoke about the consequences caused to businesses due to  the revaluation of the dram.

The meeting was attended by exporters, developers, representatives of  high technology and other sectors that provide economic development.

As Economy Minister Vahan Kerobyan noted on his Facebook page, an  agreement was reached with the business community to organize another  meeting in the near future to determine a further plan of action in  connection with the situation.

It should be reminded that in early June, in connection with the  current situation, Chairman of the Mantashyants  Entrepreneurs Union  Vahram Mirakyan, noted that due to the revaluation of the national  currency in Armenia, the exporters of agricultural products,  beverages, as well as the tourism sector, the IT sector and  developers suffered the most.  In particular, he stressed that due to  the dram's  revaluation, the sectors that  create added value and  bring money to  the country mainly suffer.  At the same time, the  head of the Union stressed that the financial  authorities of the  country would benefit.  They are afraid of  incurring reputational  damage due to inflation, because to stop the dram's revaluation, , it  will be necessary to buy the currency, which  in turn will spur  inflation. "In short, officials are sacrificing  long-term  development and growth to give the impression of short-term  gain,"  he concluded.

Earlier, Armenian Minister of Economy Vahan Kerobyan, commenting on  the situation with the dram's revaluation, stressed that monetary  policy should contribute to the country's economic growth, helping  exporters of the manufacturing industry and the IT sector that  provides services. In this regard, he stressed that exporters and the  IT sector are concerned about the dram's revaluation (on average by  18% per annum by June 9 this year - Ed.) and in these conditions the  Central Bank should start using new tools.  "We understand their  concerns about inflation, but we think that now  everything needs to  be done in such a way that important branches of  the economy do not  suffer," Kerobyan noted, stressing that the  Regulator has the tools  to ensure a more balanced exchange rate.

It is appropriate to note that the unprecedented western sanctions   imposed on Russia account for the highly volatile market since this  March. In particular, this year, from February 24 to June 22, in the  retail currency market of Armenia, the dram devalued against the  Russian ruble by 19% - to 7.1 AMD/1RUB on average. At the same time,  during this period, the dram revalued both against the US dollar - by  13% to 417 AMDs / $ 1, and against the euro - by 19% to 439.5 AMD / 1  EUR.