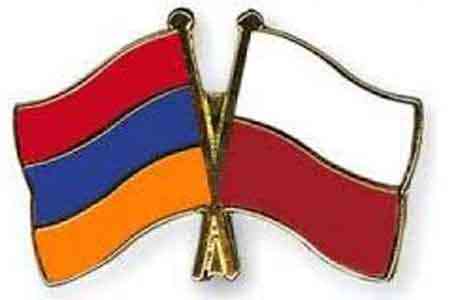 ArmInfo. Poland considers Armenia as a profitable platform for entering the EAEU market. This was stated by  Deputy Minister of Foreign Affairs of Poland, Marcin  Przydacz, during a meeting with Deputy Heads of the Economic  Department of Armenia Rafael Gevorgyan and Armen Arzumanyan.

At the same time, he noted that, in turn, Poland is ready to become  such a platform for Armenia in the context of entering the EU market.   According to the press service of the Ministry of Economy, during the  meeting the parties discussed the possibilities of developing the  Armenian capital market and implementing investment programs. In the  context of the development of the economy and business, Marcin  Przydacz noted the importance of taking joint steps towards the  development of the capital market and the implementation of venture  funds programs.

It is reported that during the meeting a wide range of issues were  also discussed, which, in particular, related to tourism, aviation,  the IT sector, the impact of the pandemic on the economy and its  consequences. The parties also touched upon the organization of the  meeting of the Armenian-Polish intergovernmental commission scheduled  for this year and the processes in the region.

The Armenian side expressed hope that the volume of mutual trade and  economic ties with Poland would reach a new level. At the end of the  meeting, the parties agreed to continue active cooperation.