Armenia, Russia to deepen strategic partnership in both nuclear and  non-nuclear energy 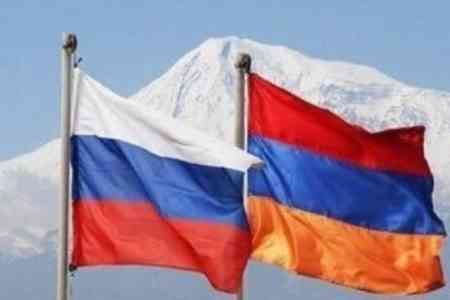 ArmInfo. The Ministry of Territorial Administration and Infrastructures of Armenia and the  Rosatom State Atomiб Energy Corporation signed a protocol providing  for the establishment of an Armenian-Russian working group to deepen  strategic partnership in both nuclear and non-nuclear energy.

This became known following the meeting of Minister of Territorial  Administration and Infrastructures of the Republic of Armenia Gnel  Sanosyan with Deputy Director General of the Rosatom State  Corporation  Nikolay Spassky, who arrived in Armenia on a working  visit.  According to the official statement of the Ministry, during  the meeting, the participants discussed in detail the comprehensive  program of Armenian-Russian cooperation in the field of energy and  non-energy projects, signed on April 19, 2022.

The results of the discussions held in the Ministry and the  agreements reached were presented during the meeting with RA Deputy  Prime Minister Mher Grigoryan. The Deputy Prime Minister noted the  importance of cooperation with the Rosatom State Corporation and  discussed with the participants of the meeting the progress of joint  work.

It should be noted that earlier ArmInfo, referring to a conversation  with adviser to the General Director of the Armenian Nuclear Power  Plant (ANPP) Hero Sevikyan, reported that  Nikolay Spassky was  negotiating with the country's authorities on the construction of a  new nuclear power unit with a capacity of 1 thousand megawatts in  Armenia. The adviser added that by 2024 the Armenian side should sign  a corresponding agreement.  The Armenian nuclear power plant, the  only one in the South Caucasus region, is located near the city of  Metsamor, about 30 km west of Yerevan. The station is traditionally  one of the main sources of electricity in the country, annually  generating up to 40% of all electricity in Armenia at one of the  lowest tariffs.