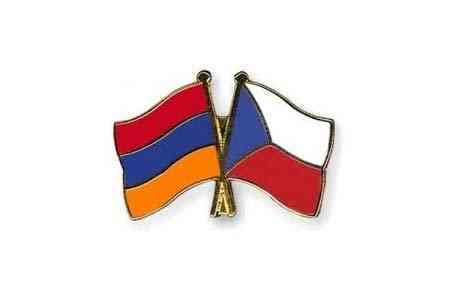 ArmInfo.Within the framework of a working visit to the Czech Republic, Armenian Foreign Minister Ararat Mirzoyan met with his Czech counterpart Jan Lipavsky.

According to the press service of the Foreign Ministry, the parties  discussed a wide range of issues related to the agenda of the  Armenian-Czech bilateral and multilateral relations. The ministers  attached importance to high-level mutual visits, as well as periodic  consultations between the foreign ministries of Armenia and the Czech  Republic, aimed at enriching the agenda of the political dialogue.

At the same time, they noted the need to fully realize the existing  potential of trade and economic relations, intensify ties between  business circles and stimulate investment. In this regard, the  ministers attached importance to the consistent and purposeful work  within the framework of the Armenian-Czech Intergovernmental  Commission and the business forums held in the two countries.

According to the source, Ararat Mirzoyan and Jan Lipavsky exchanged  views on bilateral cooperation in order to strengthen democracy,  protect human rights and rule of law. The RA Foreign Minister  presented the reforms being implemented in Armenia.

In turn, Jan Lipavsky expressed support on behalf of his country to  promote the democratic development of Armenia.  Ararat Mirzoyan also  presented to his Czech counterpart Armenia's position on the issue of  establishing peace and stability in the region, noting that  Azerbaijan's statements undermine efforts to promote these processes.

It is reported that during the meeting the parties also touched upon  the process of normalization of Armenian-Turkish relations.

It should be noted that according to the RA Statistical Committee,  the foreign trade turnover between Armenia and the Czech Republic in  January-May 2022 increased by 2.5%, amounting to $9.7 million. At the  same time, imports increased by 8.3% to $9.1 million, while exports  decreased by 39 .8% to $688.8 thousand.