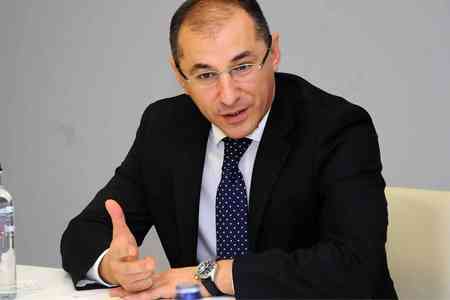 ArmInfo.Armenia's economic growth depends on demand, is a fact, and it is dangerous. This opinion was expressed by former Minister of Finance of Armenia, international  consultant on public finance Vardan Aramyan, on his Facebook page,  commenting on the July report of the International Monetary Fund  (IMF) on the prospects for the development of the world economy.

At the same time, the IMF believes that 2023 will be a weaker year,  which is mainly due to the lagging effect of current factors (the  Covid pandemic in China, real estate market problems and economic  weaknesses, transport problems, energy shortages and rising prices,  high inflation and other factors) and, especially, because of the  aggressive growth of rates of the central banks of the world>,  Aramyan wrote.  Thus, according to the IMF's forecast, the world  economic growth in 2022 and 2023 worsened by -0.4 and -0.7 percentage  points (p.p.), setting it at 3.2% and 2.9%.  The forecast for US GDP  growth in 2022 has been significantly reduced - by 1.4 p.p. to 2.3%,  in 2023 - by 1.3 p.p. up to 1%. The economies of the Eurozone  countries this year, according to the IMF, will grow by 2.6%, which  is 0.2 p.p. less than the previous forecast. For 2023, the forecast  deteriorated more significantly - an increase of 1.2% compared to the  previously expected 2.3%. The forecast for the growth of the Chinese  economy in 2022 was also reduced - to 3.3% from 4.4%, in 2023 - to  4.6% from 5.1%.  "It is interesting that the forecasts for Russia's  economic growth for 2022 have been improved, but worsened for 2023,"  the expert wrote. Thus, in 2022, the IMF expects the Russian economy  to fall by 6%, and not by 8.5%, as forecasted in April. In 2023, the  decrease in the RF GDP, according to the Fund, will be 3.5% instead  of the previously forecasted 2.3%.  <In fact, the growth of the  Russian economy has improved over the past two years, and this will  become another argument for opponents of supporters of the sanctions  applied by the Euro-Atlantic bloc that the sanctions do not give the  desired result: in fact, they cause more harm to the economies of the  Euro- Atlantic bloc than the Russian Federation>, notes an  international consultant on public finance. In his opinion, this can  still be argued in the short term (although the IMF forecasts a  recession in the Russia anyway), but in the long term, the Russian  economy will have a serious technological regression and lose its  economic potential.  As for Armenia, according to the former Minister  of Finance of the Republic of Armenia, global developments and these  forecasts strengthen his arguments that the current growth in  economic activity of 11.8% carries significant risks. "They are  mainly the result of external factors - the growth of visitors and  financial inflows, and when they weaken or stop, our economy will  face significant difficulties. However, it is difficult to say when  this will happen - (after 6 months, 1 or 1.5 years) - because it is  directly related to geopolitical developments. But the fact that we  have demand-driven economic growth is a fact, and it is dangerous>,  he summed up.

According to the RA Statistical Data, economic  activity in Armenia in H1 2022 increased by 11.8% per annum. Growth  was largely determined by the service sector - by 26.9%, to a  slightly lesser extent by the energy complex - by 14.8%, the  construction sector - by 12.7% and the trade sector - by 10.7%, in  parallel with this, an acceleration of growth was observed industrial  sector to 5.8%, and the subsidence of the agricultural sector by  5.5%. The price index of industrial products increased over the  reporting period compared to the same period in 2021 by 7.8%.