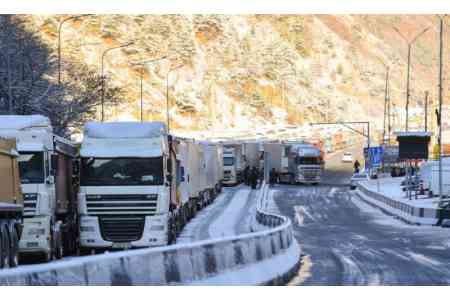 ArmInfo.  RA Deputy Minister of Territorial Administration and Infrastructures Armen Simonyan received the representatives of the Armenian mission of the Asian  Development Bank, with the participation of ADB senior local expert   Steve Allen.

According to the department, Chairman of the Civil   Aviation Committee Mihran Khachatryan and General Director of South  Caucasus Railway CJSC Alexei Melnikov also attended the meeting, the  main topic of which was the multimodal transportation of agri-food  products in the South Caucasus and beyond.

Steve Allen presented the South Caucasus Gateway project aimed at  increasing investment in the region and touched upon the  possibilities of fast transportation of perishable products.

Armen Simonyan noted that as a result of cooperation with the Russian  side, 12 more lanes have been added to the 13 existing lanes of the  Lars checkpoint, and by the end of the year the checkpoint will be  completely reconstructed, as a result of which the number of cars  serviced daily will increase several times.

Alexei Melnikov, in turn, noted that the transportation of perishable  goods by rail will become technically possible when the issues of  introducing specialized rolling stock and an appropriate  refrigeration system are resolved. Other issues related to this topic  were also discussed during the meeting.