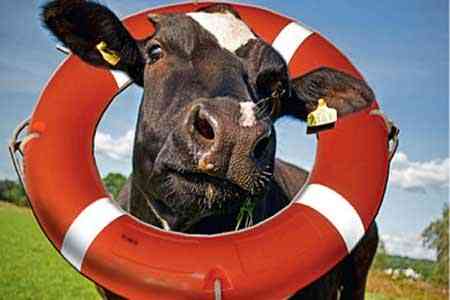 ArmInfo.The Eurasian Development Bank (EDB), in cooperation with the Armenian government and Yeremyan Farm CJSC, are launching the largest livestock program  in Armenia. EDB Chairman of the Management Board Nikolay Podguzov,  Armenian Minister of Economy Vahan Kerobyan and Director of Yeremyan  Pharm CJSC David Yeremyan signed the corresponding Memorandum of  Cooperation on August 5.

The EDB will provide financing for $25 million for the implementation  of the project for the construction of a large livestock complex,  which will be implemented with the financial support of the Armenian  government through subsidizing investment costs.

The loan funds will be used to develop a full production cycle,  including the replacement of low-income animals with breeding cattle;  expansion of agricultural areas for the production of fodder crops;  modernization of assets in order to increase the production of meat  and dairy products. The total cost of the complex construction  project is estimated at $31 million.

During the press conference that took place after the signing of the  Memorandum, it was announced that the complex will be built on an  area of 29 hectares in the Tashir community of Lori region and is  designed for 1,200 heads of cattle and a pig farm for 580 heads of  sows.

A slaughterhouse for both farms, a warehouse for fodder mixtures,  land for growing fodder crops and a parking lot for agricultural  vehicles will also be built on the territory of the complex.

Farms will comply with established international production and  quality standards, animals will be kept in conditions that meet all  sanitary requirements, in addition, regular disinfection will be  carried out, automatic water supply devices, filters, a ventilation  system and an automated feeding system will be installed.

It is planned to receive 700 tons of high-quality pork meat annually,  and daily milk production should reach 30 tons.

Nikolay Podguzov, Chairman of the EDB Board, noted that this project  is aimed at developing the strategic sector of the agro-industrial  complex of Armenia and has significant economic and social effects,  such as the development of rural areas, where 36% of the population  of Armenia lives, the opening of 300 new jobs, an increase in GDP and  providing the population with demanded foodstuffs. "Thanks to the  tripartite Memorandum concluded with the government, the work of our  Bank on the development of the agro-industrial complex in the country  will be coordinated in three planes at once: state necessity;   business interest; provision of affordable financing," he said.

In turn, the Minister of Economy of Armenia Vahan Kerobyan expressed  his satisfaction with the active work of the EDB in Armenia. "It is  very important that the large financial bodies that operate in the  region have become more active, as the economy is growing, and,  accordingly, the need for financing is also growing," the minister  added.

Director General of Yeremyan Projects Group, which will implement the  project, David Yeremyan noted that such large investments in the  livestock sector of Armenia have not been made over the past 15  years.

"We are introducing a new approach to livestock and milk production,  thereby stimulating the development of agriculture and motivating  other farms. Thanks to the implementation of the project, we will  show that it is possible to engage in high-quality animal husbandry  and produce high-quality milk in Armenia", he stressed.

The Eurasian Development Bank (EDB) is an international financial  organization that carries out investment activities in the Eurasian  space. For 15 years, the EDB has been helping to strengthen and  expand economic ties and the comprehensive development of the  participating countries - Armenia, Belarus, Kazakhstan, Kyrgyzstan,  Russia and Tajikistan.

The authorized capital of the EDB is $7 billion. The main share in  the EDB portfolio is occupied by projects with an integration effect  in the areas of transport infrastructure, digital systems, green  energy, agriculture, industry and engineering.

"Yeremyan Projects" Group of companies is one of the leaders in the  fields of public catering, restaurant business, service,vocational  education, agriculture and food production in Armenia. During the 15  years of its activity, the company has made  and implemented more  than a dozen projects.