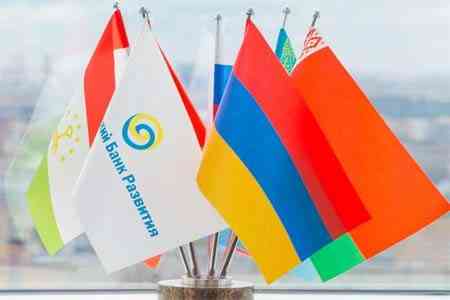 ArmInfo. Negotiations on the possibility of buying a part of Russia's share in the equity capital of the Eurasian Development Bank are underway with all the founding  countries of the EDB. This was reported to an ArmInfo correspondent  by a source familiar with the situation, who wished to remain  anonymous.

On August 9, Bloomberg, citing its sources, informed that Russia  could reduce its share in the equity capital of the EDB in favor of  Kazakhstan due to the risk of sanctions.

<Negotiations are really underway>, the source of ArmInfo confirmed,  pointing out the obviousness that if we are talking about the  redistribution of shares, then the consent of all the Bank's  shareholders is required.

It should be noted that earlier today, Deputy Prime Minister,  Minister of Finance of Kazakhstan Yerulan Zhamaubayev said that the  authorities of the republic are discussing a possible purchase of a  part of Russia's share in the equity capital of the Eurasian  Development Bank (EDB), but there is no final decision.  "In general,  there is such an intention, we do not deny it.This is indeed  discussed in a work setting. But there is no final decision yet,  since it all depends on what share will be offered, whether other  countries are ready to buy a certain share, and how expensive it will  be from a financial point of view", he said, adding that there is no  specific time frame for discussion yet. "But the EDB is working quite  steadily, and for now the sanctions do not affect this Bank much",  the head of the department explained.

Armenia became a full member of the Eurasian Development Bank in  April 2009. Armenia's contribution to the capital of the Bank is 100  thousand US dollars. As of June 30, the EDB has financed 20  investment projects in Armenia for a total amount of $419.6 million,  which is 3.5% of the total investment portfolio of the Bank. In  August of this year, the EDB signed three agreements in Yerevan for a  total amount of about $100 million.

It should be noted that the Russian Federation owns 66% of the shares  in the authorized capital of the Bank, Kazakhstan accounts for 30% of  the shares, the remaining participants - Armenia, Belarus, Kyrgyzstan  and Tajikistan have less than 1%. The issue of reducing Russia's  share to 50% is currently being discussed.