EDB: Armenia`s economy growth in 2022 will be quite high and will  exceed expectations 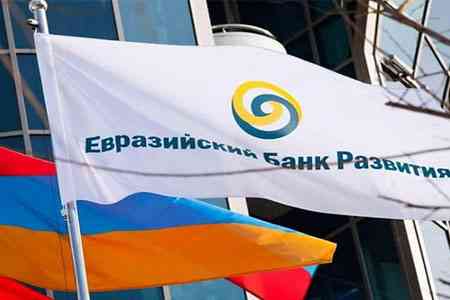 ArmInfo.Given the upward pace recorded in the first half of the year, Armenia's GDP growth in 2022 will be quite high and will exceed expectations. Alexey  Kuznetsov, Head of Economic Analysis at the Eurasian Development Bank  (EDB), stated during a round table discussion of the Analytical  Center for Strategic Research and Initiatives.

He added that the EDB forecasts that the economic growth rates in  Armenia will continue in 2023-2024, expecting an average y-o-y GDP  growth of 4%.

Speaking about the results of the first half of the year, Kuznetsov  explained that such success was achieved primarily due to a  significant increase in consumer demand in the country. <For example,  the service sector showed growth of almost 20%, trade turnover grew  by almost 10%. These two sectors provide about 80% of the growth that  we are seeing>, he said.

At the same time, he indicated that consumer support was facilitated  by a multiple increase in the number of tourists to Armenia, in  particular, by a 4-fold increase in y-o-y terms. Moreover, 40% of  tourists were from the Russian Federation, with a 2.5-fold y-o-y  growth.

Another factor of support, he called a sharp increase in remittances  from individuals. "For two months in a row we have seen a record  inflow of transfers from the Russian Federation - in May the volume  exceeded $266 million, and in June $462 million was already  recorded," the expert said. In addition, according to Kuznetsov, the  economic growth in Armenia was supported by the manufacturing  industry, the construction sector, etc.

In his opinion, support for consumer demand will continue in H2 2022,  continuing to contribute to the growth of the economy as a whole.

It should be noted that according to the preliminary data of the RA  Statistical Committee, economic activity in Armenia in January-July  2022 increased by 13.1% per annum. In July 2022, compared to the same  month in 2021, the growth in economic activity amounted to 19.4%.

According to the statistical data, during the reporting period, 3,770  foreign citizens received a residence permit in Armenia, of which  2,319 had a temporary status, and accordingly 1,451 had a permanent  status.  At the same time, the vast majority of those who received a  residence permit are citizens of the Russian Federation.- 1,059  people (257 - temporary status, 802 - permanent status).

During the reporting period, 588,731 tourists visited Armenia for  tourism purposes, which is 2.4-fold higher than a year ago.