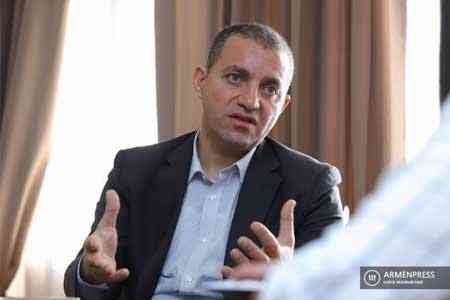 According to him, last year the volume of investments amounted to 1.4  trillion drams (about $3 billion). As the minister explained, such  dynamics were facilitated by the work to eradicate the previously  existing corruption system.

He said that the first thing he did as a minister was to study  investment projects "stuck" in the offices of officials, which turned  out to be in fairly large numbers, he explained.

Today, such a system no longer works, since there is practically no  corruption. Previously, as Kerobyan further said, this did not allow  investment projects to move quickly. , he stressed.

Speaking about the current activities, the minister noted that work  to improve the business environment and ensure the rapid execution of  investment projects continues. In addition, there are several  projects under development to stimulate investment.

According to him, as of today, the highest growth of investments in  the Armenian economy is registered in the metallurgical industry,  pharmaceuticals, light industry, and jewelry. Among the active  countries are the Russian Federation, the USA, India, the countries  of the Middle East (UAE, Qatar, Saudi Arabia, etc.).  Traditionally,  the lion's share (40%) is occupied by Russian investors, but high  interest is also observed from the Arab countries.

At the same time, Kerobyan noted that if earlier the predominant part  of investors from the Russian Federation was represented by the  Diaspora, now the situation is changing. The Diaspora factor has also  declined in the Middle East. The work, as the minister noted, is  being carried out at the government level.  At the same time, he  stressed that Middle Eastern investors are showing high interest in  the logistics and real estate market of Armenia.