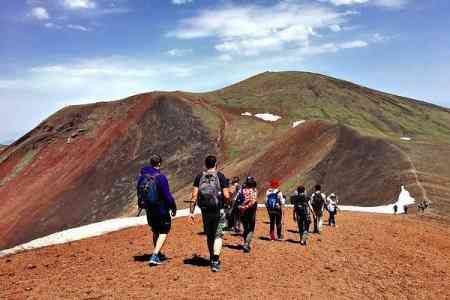 The minister was hosted by Tigran Harutyunyan, owner of the MYLER  Mountain Resort company, and Director Mher Baghdasaryan.

The company representatives told Mr Kerobyan that a ropeway, pistes,  entertainment centers, water shoots meeting European standards will  be constructed in an area of 2,080 hectares.

The ski resort is a most interesting and important initiative, which  will make Armenia much more attractive to tourists.

During the implementation of the investment program - within 2 years,  about 250 jobs will be created, and after the start of the program -  about 1,500 permanent workers with an average salary of AMD 180,000.

Mr Kerobyan, who was Acting Minister then, said the program will  cause a 0.2% annual GDP growth, with AMD 1.2bln to be paid to the  state budget.

On February 3, 2020, during an Armenian-Austrian business forum,  Myler Mountain Resort singed a contract with Doppelmayr, a world  leader in ropeway construction, on the purchase of a new ropeway  worth a total of EUR 24mln.

On July 21, 2021, Armenia's government granted MYLER Mountain  Resort's application for exemption from duties on the import of  equipment, spare parts, and materials. The new ropeway is expected to  be put into service in 2023-2024.