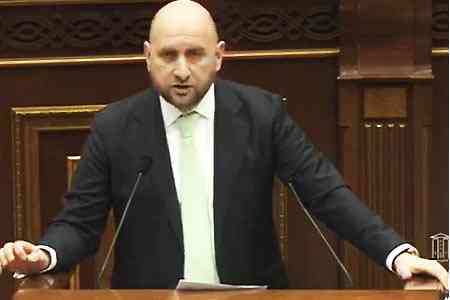 ArmInfo. The Central Bank of Armenia significantly improved its forecast for the growth of Armenia's GDP for 2022 - from the previous 4.9% to the updated 12.9%.   Chairman of the Central Bank of the Republic of Armenia Martin  Galstyan stated on September 13 at a press conference convened to  raise the refinancing rate from 9.5% to 10%, said the.

He noted that high economic growth is dominated by the influence of  demand factors. And the latter, as before, is due to a tangible  influx of international visitors and remittances. In this regard, the  growth expected in 2022 in the services sector has significantly  improved - from 7.5% to 19.4%, and construction - from 8.9% to 14.1%.  And the revised forecast growth in the industrial and agricultural  sectors will be the same 3.2% each, with a slight improvement  compared to the previous pace. According to him, positive trends  remain in exports as well.

M. Galstyan said that annual inflation at the end of 2022 will reach  10.3%, but by the end of 2023 it will stabilize around the target  level of 4%. According to the latest data, in August the official  y-o-y inflation slightly decreased - to 9.1%, while the core y-o-yl  inflation continued to grow, reaching 10.2%. He drew attention to the  rise in prices of non-food products and the increase in tariffs for  services (by 8.2% and 6.2%, respectively, while food prices rose by  12% - ed. note).

The weakening of the inflationary influence from the external sector  on the Armenian economy is expected.  In Q3, the trend of low  economic growth and high inflation is maintained in the main trade  partner countries of Armenia. The central banks of developed  countries will continue to pursue a restrained monetary policy. This  will tighten global financial conditions and slow down economic  activity in partner countries. As a result, the international  commodity market will experience some price reduction, which will  gradually ease the inflationary environment on a global scale. The  FAO food price index for March-August 2022 has already fallen from  160 points to 140 points.  It should be noted that the Central Bank  updated its forecast report, of course, before the start of today's  military aggression of Azerbaijan against the sovereign territory of  Armenia, and in fact this factor is not taken into account in the  expectations of macroeconomic indicators.

In the June forecasts of the World Bank and the International  Monetary Fund for 2022, the expected growth of Armenia's GDP was  improved to 3.5% and 5%, respectively (from the previous 1.2-1.3%).  And the international Fitch Ratings agency, which much later (in  early September) updated its forecast for Armenia's GDP growth for  2022, announced a much higher bar - 6.4% (against the previous 1.3%).  But even these growth rates still fall short of the pre-Covid GDP  growth of 7.6% (in 2019) and are not much different from the 5.7%  growth in 2021. However, it is worth noting that economic activity in  Armenia reached double-digit growth rates in February 2022,  accelerating them to 13.4% per annum in January-July, while inflation  in the food market has already reached 13%.

These international agencies note not only geopolitical risks  (cautious approach in relations with the US, UK and EU in terms of  anti-Russian sanctions, continued high tension in relations with  Azerbaijan), risks of overheating (growing demand from expatriates),  risks of stagflation in their forecast reports, but they also pay  attention to the decrease in external liquidity risks (due to the  growth of external reserves to a 20- year high of $3.5 billion,  including the Stand-By loan from the IMF, as well as due to an  increase  in the inflow of transfers), and reliable support from  creditors.