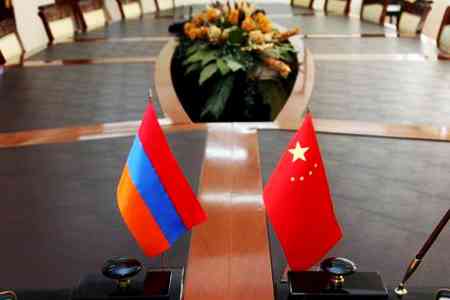 ArmInfo.Armenia and China are considering the possibility of organizing direct flights between the countries. This became known during the meeting of the Deputy  Ministers of Economy of Armenia Ani Israelyan and Armen Arzumanyan  with Ambassador Extraordinary and Plenipotentiary of the People's  Republic of China to Armenia Mr. Fan Yong.

As noted during the meeting, the launch of direct flights will  contribute not only to the development of tourism between the  countries, but also to the strengthening of business ties.

According to the press service of the Ministry of Economy, the  parties also discussed the prospects for expanding economic  cooperation in various areas, and in order to increase awareness,  they considered the possibility of organizing joint exhibitions.   Back in 2017, the governments of Armenia and China initialed a new  agreement on direct air traffic and signed a Memorandum of  Understanding between the aviation authorities of the two countries.   It should be noted that according to the data of the Statistical  Committee, the foreign trade turnover between Armenia and China in  January-July this year, exceeded $829 million, up 29.3% year-on-year.  At the same time, exports decreased by 20.7% to $198.4 million, while  imports increased by 61.3% to $630.5 million.