Governor: Due to the enemy`s actions, the Sotk gold mine is operated at 40 percent 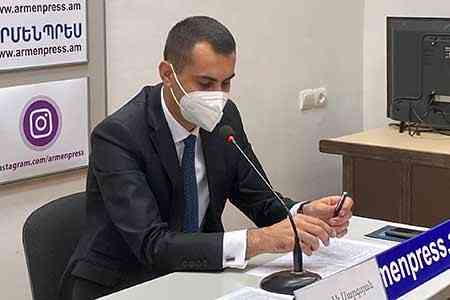 ArmInfo. After a large-scale military aggression by the Azerbaijani armed forces on  the night of September 13, the activity of the Sotk gold mine was  stopped.  Governor of Gegharkunik region Karen Sargsyan announced  this to journalists on September 29 during a study visit of foreign  diplomats to familiarize themselves with the consequences of the  Azerbaijani attack on peaceful settlements.

<The mine has only been idle for three days. Now it functions at 40%,  that is, about 40% of employees are at work, whose safety is fully  ensured. However, many employees fear for their lives because of the  actions of the Azerbaijani Armed Forces>, the governor said.

The Sotk gold mine is operated by GeoProMining Group of Companies. It  is the largest gold deposit in Armenia. The company also manages the  Ararat gold recovery plant in Armenia. The mine is located on the  border of Gegharkunik region and Karvachar region. After the  hostilities of 2020, the border passed right along the mine (part of  it came under the control of Azerbaijan).

It should be noted that representatives of the diplomatic missions  accredited in Armenia paid a visit to the Gegharkunik region, where  they were presented with the consequences of the shelling of peaceful  settlements by the armed forces of Azerbaijan. The diplomats were  accompanied by RA Minister of Territorial Administration and  Infrastructures Gnel Sanosyan and Gegharkunik Region Governor Karen  Sargsyan.