Instead of investing in science, which is the only competitive  advantage of Armenia, the Armenian authorities finance the security  forces - Economist 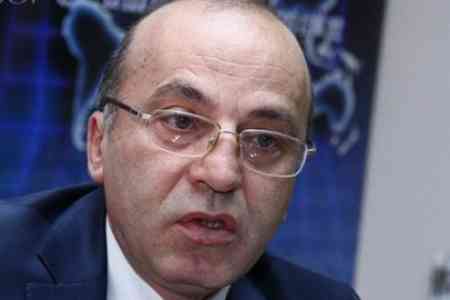 ArmInfo.The budget expenditures for the Armenian Police in 2023, as in the previous 2-3 years, are many times higher than the expenditures for scientific research,  which clearly indicates the priorities of the RA government.

Tatul Manaseryan, head of the "Alternative" research center, Doctor of  Economic Sciences, stated this opinion in an interview with an  ArmInfo correspondent, commenting on the indicators set in the draft  of the main financial document for next year.

Revenues, which are planned at the level of 2,301.3 billion drams or  24.7% of GDP, will increase by 259 billion drams, including tax  revenues (taxes and duties) by 280 billion drams, which will exceed  the adjusted figure for the current year.

At the same time, the total allocations of the RA Police from 66.6  billion drams in 2022 will increase by 9.6 billion drams, or by  14.4%, to 76.2 billion drams. Meanwhile, only 29.8 billion drams have  been allocated to the science sector, that is, for conducting  fundamental, applied and thematic research of scientific and  technical activities, maintaining and developing infrastructure and  scientific facilities of national importance, ensuring the  reproduction of scientific potential in 2023.

The expert recalls that in their forecasts, the financial authorities  of Armenia were based on the assumption that in 2023, due to the  Russian-Ukrainian conflict, the volume of exports, tourist flow,  transfers, as well as the stay of Russian relocators in the Republic  of Armenia will continue to increase. Over 250,000 visitors from the  Russian Federation, Belarus and Ukraine became as the < of  the growth of the Armenian economy in 2022. It is on the basis of  this that the authorities of the republic claim a double-digit  increase in GDP and an increase in tax collections, thanks to which  they hope to cover the growing volume of current expenses, he noted.

Meanwhile, according to Manaseryan, by increasing pensions and the  minimum wage (from 68 thousand to 75 thousand drams, ed. note), the  financial authorities did not assess the country's ability to  counteract economic threats. In the absence of price containment so  far, the economist also does not see an analysis of the adequacy of  the announced increase to a possible increase in the minimum consumer  basket in Q1 or H1 of the year. In this context, he categorically  disagrees with the assertions that the big inflationary wave has  already passed. ,  Manaseryan asks.

In addition, according to the expert, the RA authorities  underestimated the consequences of "peaceful life" for the tax  revenues of the state treasury. "After all, at some point the  conflict over Ukraine will end and the burden of ensuring the tax  revenues planned by the state budget will fall on the shoulders of  2.9 million citizens of Armenia. Meanwhile, according to the forecast  of the World Bank, the poverty rate in Armenia by the end of 2022 may  increase from 27% to 42% - an indicator unprecedented in the years of  independence. It is not clear how, with such a low level of  purchasing power of the population, the planned taxes will be  collected>, the expert said.

Under these conditions, according to Manaseryan, the authorities  should have taken advantage of "bonuses" for the Armenian economy  this year and started creating solid foundations to increase its  ability to withstand chalanges in the absence of "bonus" artificial  stimulants. For this purpose, according to the expert, for example,  it was necessary to develop microbusiness and invest more in the  development of science - so far the only competitive advantage of  Armenia, and not spend money on representation expenses and bonuses  to state officials.