AMD 4,827,643 to the Homeland Defender’s rehabilitation center: The November beneficiary of "The Power of One Dram" is the "Aren Mehrabyan" Foundation 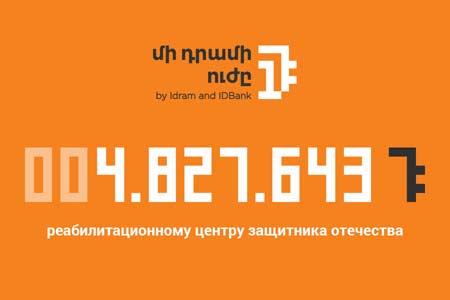 ArmInfo.A few days ago, Idram and IDBank summed up the October program of the "The Power of One Dram" initiative. The amount collected, AMD 4,827,643, was transferred to the Homeland Defender’s rehabilitation center.

This was the second cooperation of the Homeland Defender’s rehabilitation center with Idram and IDBank. This time, the donated money will be directed to the programs implemented for disabled soldiers, contributing to their health recovery and solving social problems.

The companies also announced the winner of the month of November. The entire amount accumulated during the month of November from payments made through the Idram&IDBank application, IDBanking.am online platform, Idram or company terminals will be transferred to the "Aren Mehrabyan" charity fund.

The "Aren Mehrabyan" charitable foundation was created by the initiative of the big family of Aren Mehrabyan, based on the dream of the eldest son, Aren, who fell in the 44-day war, to establish a machine-building production of aerospace engines and electric vehicles with vertical take-off and landing (eVTOL) in Armenia, thus laying the foundation for an Armenian to the space program.

According to Tatevik Vardevanyan, the head of the communication unit of IDBank, education is the main direction of CSR for the Bank and Idram, and it is not the first time that the amount collected by "The Power of One Dram" should be directed to the development of the educational sector. "Aren's parents created a foundation to make their son's dream come true, through which they currently educate 120 young people who participated in the 44-day war. They receive education with specializations that are highly demanded in the world and what is especially important, they are also provided with a job after completing the courses. Although this is the smallest thing we can do for a foundation with such a big mission, we hope that this will be a good example for a number of organizations as well, because quality education is the pillar of our future," Tatevik Vardevanyan said.

"Aren Mehrabyan" Foundation has created an educational system that provides free education through short-term technical courses to the participants of the 44-day war, to those who became disabled as a result of the war, to the family members of fallen servicemen, as well as to all those who want to be educated in mechanical engineering, programming and in aerospace engineering.

According to Mher Mehrabyan, the founding director of the "Aren Mehrabyan" Foundation, "The Power of One Dram" creates an opportunity for our compatriots who did not save their health during the war to implement seemingly impossible educational programs. "The project has proven that the impossible becomes possible thanks to the unity, consistent and professional work of the team. It is difficult to break away from everyday life and solve the problems of the future. "The Power of One Dram" initiative is perhaps the bridge that connects the everyday life with the building of the future of our young people," said Mher Mehrabyan.

All of us can become goodwill ambassadors by supporting a number of vital organizations, foundations, simply by making payments with the Idram&IDBank application, IDBanking.am online platform, Idram or company terminals.