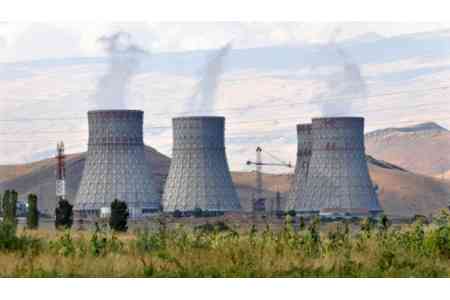 ArmInfo. Minister of Territorial Administration and Infrastructures of the Republic of  Armenia Gnel Sanosyan received the delegation of "Rosatom" headed by  Olenin Yuri,  Deputy Director for Science and Strategy of Rosatom,  Chairman of the Board of Directors of TVEL JSC. This was reported by  the press service of the ministry.

According to the source, welcoming the guests, the minister, stressed  the importance of cooperation with Rosatom.  During the meeting, a  number of issues related to the construction of a new power unit of  the nuclear power plant were discussed.

Earlier, Gera Sevikyan, advisor to the general director of "Armenian  NPP" CJSC, stated in a conversation with the ArmInfo correspondent  that Russia will present Armenia with three options for the  construction of a new nuclear power unit, of which, according to  Armenian specialists, VVER TOI  is the most preferred one, but the  final decision will be made after all three options are received and  studied. According to Sevikyan, the issue of building a new nuclear  power plant is fixed in the Strategy for the Development of Domestic  Energy. "It is obvious that nuclear energy is undoubtedly a  necessity.The construction of a new unitlasts about 10-11 years, and  if the unit of the existing station is stopped in the interval, it  means the loss of all available potential, including specialists. For  this reason, the task is to extend the operating life of the existing  power unit until 2036", the adviser to the general director  emphasized, adding that in order to implement the task, the extension  concept has already been developed, which was discussed and received  a positive assessment.