Pashinyan promises "geometric growth" of economy, in case of  implementation of  peace agenda 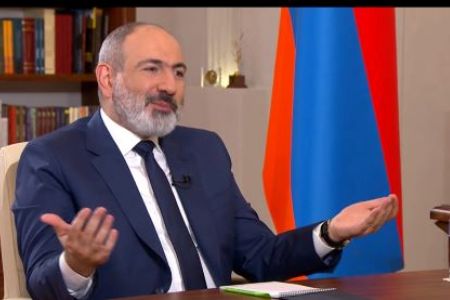 ArmInfo.Armenian Prime Minister Nikol Pashinyan promised that if the peace agenda is implemented, Armenia's economy will begin to grow exponentially, then he interrupted himself, clarifying with a smile that it was already a little  exaggerated.

And yet, in his interview with the PTA, Pashinyan noted that the  country has all the prerequisites for maintaining high economic  growth. This year, up to 13-14%, and in 2023 - up to 7%. He  emphasized that the impact of GDP growth on improving the lives of  citizens should be considered not only in terms of wage growth, the  average of which increased by 16% over the year, but also in terms of  government measures aimed at a 20% increase in healthcare funding,  unprecedented growth the number of new jobs, an increase to 22  billion drams in budget financing of subvention programs aimed at  road construction and improvement of local infrastructure. According  to him, this year the state returned 41 billion drams from the income  tax paid by them to residents as part of state support for mortgage  lending programs.

Pashinyan cited high inflation as the biggest problem, although he  said Armenia recorded the lowest consumer price growth in the region.

The prime minister agreed with the opinion that a significant  revaluation of the national currency creates difficulties for  importing producers, but suggested looking at this problem from the  point of view of the existing fundamental factors inherent in a  market economy. "Today we are proud to be ranked 11th out of 165  countries in the Economic Freedom Index. Armenia has proved that it  is a country with an open market economy. Yes, there are concerns,  but there are also market realities. The Armenian government cannot  set the dram exchange rate, and if the government interferes in  exchange rate policy like this, I am sure that our economy will only  lose from this>, Pashinyan emphasized.

He noted that the government is well informed about the situation  resulted from the revaluated dram. "Our team of experts, together  with the Central Bank specialists, is constantly discussing this  issue. Although we believe that we are pursuing the right economic  policy, as evidenced by unprecedented economic growth, we know that  we must listen to the opinion of the business community, to the  messages coming from it.  They need to be analyzed, which is what we  are doing. And if there are objective reasons, then they should be  responded to using the right tools, and in no case should one  interfere in the monetary policy of the Central Bank. Otherwise, we  will lose our marketability. It is very important for us to maintain  our leading position as a market state on the economic map of the  world>, Pashinyan said.

It should be noted that as of the end of October, inflation in  Armenia amounted to 9.5%, which is a high figure compared to the  target level of 4%. According to the head of the Central Bank of the  Republic of Armenia Martin Galstyan, the revaluation of the dram  significantly restrained the inflation rate, without this factor it  would have reached at least 14%.