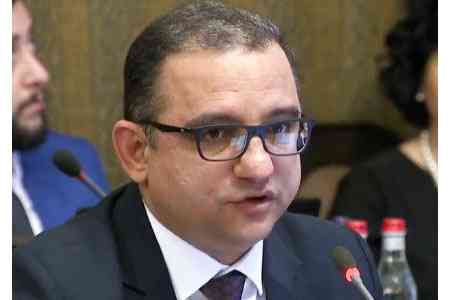 ArmInfo. There is no alternative to Armenia's accelerated economic development, Armenia's Minister of Finance Tigran Khachatryan stated in Parliament on  Tuesday.

"There is no alternative to Armenia's accelerated economic  development. Growing tax revenues, targeted expenditure programmes,  new borrowings to finance the budget deficit and enhancing the debt  management efficiency are the focus of our fiscal policy aimed at the  priority development of the private sector and a favorable  macroeconomic environment," the minister said.

The 2023 draft budget was drawn up amid serious international and  regional challenges. The year has seen greater global economic  instability, with low-rate international trade, more expensive and  labor- intensive transportation, rising prices for goods and  services, which, in turn, has had a negative impact on Armenia's  economic environment, with higher economic risks. However, despite  the aforementioned uncertainties, economic activity surpassed all  expectations - 14.1% this January-September. As a result, the  government-set tax revenue target will be exceeded.

"This will enable us not only to finance this year's on-budget  expenditures, but also allocate additional funds to new security,  economic and social programmes and expedite the implementation of the  government-set tasks," the minister said.

This year can see a record-setting economic growth in the past 15-20  years. Next year, the economic growth is expected to be the benchmark  for efficiency of reforms and of Armenia's economic policy.

Next year, the Central Bank of Armenia (CBA) will continue its policy  of high refinancing rates aimed at the target of 4% by the end of  next year.

The latest economic developments and AMD appreciation reduced the  government debt: 60.3% of the GDP by the end of last year against  less than 53% expected by the end of this year. According to the 2023  draft budget, the government's debt is to be reduced to 50% of the  GDP.

In 2023, Armenia's tax revenues are to reach AMD 2,204bln - AMD  280mln more than the adjusted figures for this year and AMD 360mln  more than budgeted for 2022.On-budget expenditures are to total AMD  2,590bln (27.8% of the GDP) or 18.3% more than budgeted for 2022.  This will allow the government to increase the funding of  socio-economic programmes and security initiatives. The budget  deficit will be 3.1% of the GDP, near the target. Efficient  management of national debt is expected to play a key role in  national debt management.